There have been a few recent articles and posts about bullying and elitism in genealogy that are worth reading. Do these issues exist in genealogy? Yes, of course they do! There are more than enough people participating in this field that such a claim can be made on probabilistic grounds alone. We are human, and human interaction often suffers as a result of personal goals or dislikes. 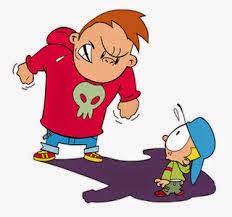 While neither of these issues can be justified, it's worth considering the mindset behind them. What would cause one genealogist to personally berate another, as opposed to criticising their data or methods, and why would some genealogists look down on others? Occasionally, the issue is less blatant, and may take the form of the cold shoulder. I'm personally aware of people who deliberately ignore others because of what they say, or how they say it, rather than indulging in discussion on their viewpoint.

A large part of the explanation can be linked back to the schism in genealogy: the one that we all know about but don’t like to talk of. There are researchers who want to be very rigorous, produce journal-quality write-ups, and would like their work to be appreciated by their peers. There are other researchers who indulge out of personal interest, and who mainly wish to share data with their family. While the reality may be slightly more of a greyscale, let’s call these extremes the academic and the hobbyist. Note that these must be viewed as different goals rather than different levels of expertise.

I’m including professionals in my academic category because of their approach to quality and rigour. I know that some people fear those with BCG certification, and hence letters after their name, even when they don’t mean to be imposing or overbearing. Consider, though, that such people have worked to achieve that certification — just as anyone studying for a qualification will have worked — and they should be admired for it. It indicates a commitment to acquiring personal skills and knowledge — not divinity. Many of us would like to think that we could attain that certification, if we had the time and the money, but would it be relevant to the hobbyist sharing with their family? Even the hobbyist is in a position to recognise the advantages of consistency and quality in genealogical research, and there are many books to help teach themselves if they don’t feel that a qualification is appropriate, such as those of Elizabeth Shown Mills and Thomas W. Jones.

One of the most common points of criticism between these genealogical factions is sources. Public family trees most often have no source citations, and the academics allegedly don’t like that because it means the associated conclusions are unsubstantiated and of little use to them. Well, it runs much deeper than this. The perception that public trees are inaccurate, unsubstantiated, and of poor quality, means that this side of genealogy is frowned upon by academics generally, not just genealogical ones. It will probably never be accepted as a form of historical research while this can be demonstrated, but do source citations help?

As I’ve said in a previous post, source citations are better than nothing at all, but they don’t guarantee accuracy. Providing a direct link to a census page or BMD record does not make the data correct, and it may even be insufficient without some narrative explanation in complex cases. In effect, we should not confuse good-intent with accuracy. Providing citations in a public tree shows good intent, and it will certainly help the associated author if-and-when they find a problem in their own data. Education is therefore a crucial factor for newbies who are just starting out.

Unfortunately, public trees are plagued by certain other issues. Because of the nature of the tools that are made available, it is too tempting to copy-and-paste data from other trees into your own. This is bad because there is an assumption that the other tree is accurate, it provides no attribution to the original author (if that they were), and there is no association allowing the source of conclusions to be followed. The overall result is that inaccuracies propagate like mad until you find multiple trees that all show the same error, and there’s then no indication of where it all started. I know through experience that attempting to tell another researcher that their data is incorrect because so-and-so is bound to elicit a variety of responses. Maybe they do see the logic and thank you for it. Maybe they get angry because it’s their family, or because everyone else agrees with (read as “copied”) the data. Quite often, though, you get no response at all, and this maybe because the author has become a leaf on their own tree, or because they’ve abandoned that tree after toying with it for a short while. We all know the end result of this, and it’s hardly surprising that genealogists get very frustrated with the current state of things. I admit to being one of the frustrated, and I have voiced strong opinions about the state of public trees, but it would be pointless and plain wrong to criticise specific individuals. I understand that the reasons are neither simple nor imbued with malicious intent.

There are other serious frustrations in genealogy at the moment, in addition to those of accuracy and sources citations. Some people are just fed-up with people stealing their data. This is an emotive word but it’s used regularly in this context. There are legal aspects to this issue, too, such as mere “facts” (i.e. discrete data) not being subject to any type of copyright or ownership. If you put names, dates, places, and so on, into your public tree then there’s nothing illegal about someone copying them, and bloggers like James Tanner regularly write about this. Where there is a strong case for some sort of authorial protection is when the tree is replaced with a more academic or creative work, such as when it contains complex proof arguments or narrative content. It’s rare to find this sort of content in public genealogical data, partly because there’s no structure to accommodate it, and partly because there’s no authorial protection. By that, I mean no mechanism by which attribution is automatic and where the data is linked rather than duplicated.

I used to have an online public tree that I published as “cousin bait”, but it was recently taken down because it was no longer attracting any contacts. I believe this is because people are now more concerned with data that has source citations, and so are confusing that aspect with some guarantee of accuracy. Anyone who reads my blog will know that I also post articles that summarise particular lines of genealogical research, or even micro-history, including my reasoning and my findings. I try to do this in a way that is easy and enjoyable to read, rather than as professional-style research reports, because I also want my extended family to enjoy them. This probably works better than a bare online tree as I can include much more detail and structure, including proper reference-note citations (not just electronic bookmarks). It also means that I can publish information that was not available in public records, with implicit attribution to me on the date of publication, and present justified conclusions that may differ from those of others.

These two approaches (tree vs. blog) are poles apart, though, but it doesn’t have to be like that. It is conceivable that a structured narrative contribution could be uploaded to a public site, and automatically associated with the relevant leaves on a public tree by virtue of mark-up that identifies the individuals and their relationships. From an end-user’s perspective, the appearance would be that of a public tree that links to many private narrative contributions, and which would therefore support authorial ownership and automatic attribution. The tree itself could be dynamically formed from the uploaded contributions (explained a little better in What to Share, and How — Part II), and so could accommodate differences of opinion without getting into edit wars. Of course, an essential ingredient would be some sort of personal preferences about whose contributions to include or hide in your private view, and maybe the ubiquitous ‘Like’ button, but a fundamental advantage is that all private contributions would be there and there would be no need to duplicate any of them.

In this article, I have mentioned education as being a factor in reducing the genealogical schism, and so reducing the temptation to bully or become snobs, but it cannot all be blamed on the hobbyist’s education. I have also mentioned other frustrations that affect both hobbyist and academic alike, and the main cause of those is probably the scope of the software models used for collaboration. The answer is not in single-truth unified trees, and it’s not in user-owned trees either. The software industry really needs to take a different tack on collaboration and save genealogy from implosion. I am not using that word simply to be sensationalist; I genuinely believe that a core part of genealogy is a demonstrable disaster. I would like to suggest that FHISO be involved in discussions of collaborative models as the inability to share data accurately and fully is another one of those serious frustrations, and also  because they are fast becoming aware that we need considerably more than the mere sharing of conclusions; whether source citations are present or not. Letting things slide further by doing nothing at all is compounding the damage already done.

Posted by Tony Proctor at 13:35 No comments: