Boots Made For Walking 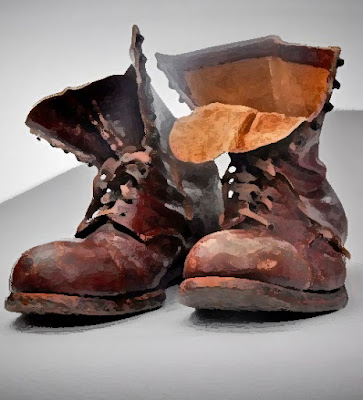 One of my g-g-grandmothers was an Elizabeth Annie Barradell, and she married a Benjamin Webber — the son of the Robert Webber mentioned in The Story of Three Brothers — on 27 Feb 1881 at Nottingham St. Peter.[2] Her father was a lace maker named Henry Barradell. I could see from the 1871 census that her mother was an Emma,[3] which helped confirm that Henry Barradell had married Emma Elizabeth Hammond on 11 Jun 1864 at Radford St. Peter, in Nottingham.[4] Note, however, that although the civil registration and parish register both recorded her name as Elizabeth Emma Hammonds (forenames switched and an extra ‘s’ on surname), and the associated newspaper notice gave her name as Elizabeth Emma Hammond (no extra ‘s’),[5] she never used this forename order anywhere else (see census tables below). In fact, she was born Emma Elizabeth Hammond in Leicester in c1844 to a mother with the maiden name Brewin,[6] and the other forename combination likely originated from a single clerical error at the time of the marriage.

Finding the birth of Elizabeth Annie Barradell was not straightforward because there was no visible baptism, and the civil registration of her birth, on 28 Jan 1863, was under the name of Elizabeth Ann (not Annie) Hammond (not Barradell), and with no father recorded.[7] In other words, she was born 18 months before her mother was married to Henry Barradell, and so her biological father was questionable even though she gave Henry’s name at her own marriage.

The marriage register identified Emma’s father as John,[8] and although her mother’s forename would soon come from the census, the following small tree illustrates the basic starting point for this research.

At this point, it was necessary to find these people in the various census returns of England — something that most people do with far less information in hand.

Table 3 – 1861: Household of John Hammond. 5 Pelican Street, Radford, Nottingham.[11]
[a] Wittick was probably meant to be Whitwick, but written as pronounced locally.
[b] Census appears to show “Harby” but she was baptised 28 Sep 1806 in Hoby parish, Leics., to Joseph and Elizabeth Brewin (“Leicestershire Baptisms”, Findmypast, accessed 16 May 2017).

This data is interesting, but also a little confusing. The 1851 and 1861 censuses are consistent, but 1841 shows an entirely different set of children for John and Catherine, and disagrees on the birthplace of Catherine. Do I have the right couple?

According to the 1851 and 1861 censuses, both parents and all their children were born in the county of Leicestershire, but they had moved to Nottingham by 1861. It’s temping to simply assume that the older children had left home and made way for newer children — this indeed being what some online trees had done. However, Maria would have only been 13 in 1851, had she been listed, so did she die young?

There was a need for information from additional sources that would strain this rash hypothesis to see if it broke down.

Looking at the parish records for Nottingham showed that John and Catherine’s daughter, Harriett, was born 3 May 1851 but baptised seven years later (21 Feb 1858) in Nottingham’s St. Barnabas RC parish.[12] However, the civil registration of her birth was actually in Leicester.[13] There are several possible explanations for this geographical split, including that they moved in between, or that the mother stayed with family for the birth, but the seven-year delay supports the idea that they had resettled in Nottingham about that time.

There were no further baptisms of children to John and Catherine in any parish of Nottingham.

Looking at the civil registrations for children of John Hammond and Catherine Hammond née Brewin revealed that they’d lost several young children while living in Leicestershire, and that the surviving ones were in agreement with the 1851 and 1861 censuses.

Except, that is, for the birth of Maria Hammond. Having been registered in Q1 of 1841 then there is no way that she could have been “3” in the 1841 census, occurring on 6th June, but she could very well have been “3 months”. This is a prime example of the reliance on a single source having you chasing phantoms.

None of their children’s births were registered in Nottingham.

Comparing these events with the registers for Leicestershire parishes was informative.

There are a couple of things to note here: only two of the children were ever baptised in Leicester, and both of them were baptised shortly before their death suggesting that they were sickly. Although this was an Anglican parish, a belief in Limbo of Infants would suggest that either John or Catherine may have been raised a Catholic. This theory is supported by the fact that their Harriett was later baptised in a Catholic parish of Nottingham.

Looking for baptisms of the earlier children, who all preceded civil registration, was not straightforward. The following were the only candidates that I could find.

It’s possible that, like the subsequent children, they were never baptised. Apart from these possibilities matching on father’s name, baptismal dates being very close to census birth dates, and on father’s occupation, they all had a mother whose name was Elizabeth. If they were the correct ones then it meant that I needed to search for an earlier marriage. It would also suggest that this Elizabeth’s preference was for children baptised in Anglican parishes, and hence that his second wife (Catherine) was the one with any Catholic leanings. The second of these baptisms was for an explicit “Eliza”, but her mother was “Elizabeth” and so the census use of the longer form would not be unexpected. Being pre–civil registration, we have to assume that the baptism place matches the birth place (unlike Harriett, above), but the geographical scattering would still need justifying — Pipe Street was in the Sneinton area of Nottingham, and Melton Mowbray is a small town about 20 miles NE of Leicester.

Elizabeth Hammond (maiden name yet to be determined) had died 22 Sep 1838 at 24 Narrow Marsh, Nottingham, aged 47, associated with “child birth”; occupation of her husband, John, was a cordwainer.[15] No living child was recorded from her pregnancy. The newspapers reported it as follows: “Nottingham, on the 24th instant, in childbed, aged 47, Elizabeth, wife of Mr. John Hammond, shoemaker, formerly of Leicester”,[16] and that confirms we have the correct person. Elizabeth was buried on 26 Sep 1838 at Nottingham St. Mary,[17] the same parish where her daughter, Catherine, was baptised four years before.

It was then easy to show that John Hammond’s marriage to Catherine Brewin was on 22 Jan 1840 at Leicester St. Margaret, well after the earlier three children were born. The marriage certificate confirmed that John was a widowed shoemaker living on Dover Street, Leicester.[18]

Since John had a particular job then checking the trade directories might give his address; however, after checking over a dozen ones covering the right locations and time periods, only the following two mentions could be found:

There were no mentions in the London Gazette.

There were a small number of additional newspaper reports. In 1857, his residence was being auctioned along with others: "And also all those NINE MESSUAGES OR DWELLING-HOUSES situate in Pelican Street, New Radford, in the respective occupations of ... Mr. Hammond ...".[21] The following two were of court appearances:

[1847] John Hammond, of Church-gate, was charged with neglecting to clean the street in front of the house, after night-soil [human excrement collected at night from buckets, cesspools, and outhouses and sometimes used as manure] had been emptied on Friday morning. The defendant stated that the water had been so much frozen that it was impossible to wash the causeway, but it was effected as soon as a thaw took place. Case dismissed.[22]

[1851] A middle-aged man, named John Hammond, a shoemaker of Wharf-street, was yesterday committed to the Borough Gaol for two months, in default of paying ten pounds, for grossly assaulting two girls of about eleven years each.[23]

But this still hadn’t identified who John’s first wife was so the Leicestershire marriages were searched for one between a John Hammond and any Elizabeth, before or near the birth of William in 1820. There were none! Given that Hammond was sometimes transcribed as Hammonds, the surname was relaxed to Hamm*, i.e. anything beginning “Hamm”, and it found just one candidate between 1812 and 1845, but it was between a John Hammans and Elizabeth Whalley on 7 Apr 1820 in the parish of Melton Mowbray.[24] Now this was very interesting because William was born in this same parish — in fact, he was baptised in the very next month — and if John was a visitor to the parish then the clerk might not have been familiar with his surname.

Coincidence? Well, we know that John’s Elizabeth was 47 when she died in 1838, and that would mean she was born in 1791. Elizabeth Whalley was born in Melton Mowbray on 2 Mar 1791,[25] and so that clinched it. The eleven-year gap between their first and second child might have something to do with this having been a shotgun wedding as no evidence of military service or imprisonment could be found during that period.

Lastly, the very next entry in the marriage register was for a Thomas Brewin; although unverified here, it is possible that he was a relation to John’s second wife (Catherine).

Catherine’s death didn’t show up in any of the parish registers because she was buried on 13 Aug 1881 in Nottingham’s privately-run General Cemetery, along with members of the Barradell family.

So what of Elizabeth’s three children?

Eliza eventually married a much younger man, John Jowett — a pawnbroker’s assistant, born c1846 in Basford, Nottingham[32] — in Leicester in 1867.[33] No church equivalent found. Using a combination of the census and newspaper reports, it can be shown that they moved from Leicester to Nottingham in 1891. Eliza died in Nottingham in c1917 aged 85.[34]

The eldest son, William, moved to Leighton Buzzard, Bedfordshire, and married a Sarah Sanders of that place in 1847.[35] He became a master shoemaker,[36] and died in 1904.

·         At Leighton Buzzard, on the 29th ult. [29 Aug 1904], Mr. William Hammond, aged 83 years.[37]
·         21, HOCKLIFFE STREET, LEIGHTON BUZZARD. OLD-ESTABLISHED BOOT and SHOE BUSINESS. MRS. HAMMOND Begs to tender sincere thanks to the numerous ladies and gentlemen who have patronised her late husband during the period over fifty years has carried the above business, which, she takes this opportunity of apprising them, will in future be conducted by herself, in conjunction with her son, WILLIAM HAMMOND. She assures them that no pains will be spared to merit a continuance of the confidence so long reposed in her late husband, and hopes, by employing only skilled and experienced workmen, to merit the generous support of the public of the town and neighbourhood.[38]

It’s always a good plan to create a timeline for what you know. This can often shed new light on your information, and possibly explain changes and geographical movements.

Table 9 – Timeline for events in the life of John Hammond.

Another use of a timeline in situations like this one is locational consistency: if the locations of the similarly-named people changed after discrete periods of time (rather than randomly) then it strongly supports them being the same person. If there are records suggesting they were in different places at a similar time then it weakens the case, and if a single record suggests they were in different places at the same time then it’s a complete show-stopper.

The above timeline shows several movements between the two counties (Nottinghamshire in white, and Leicestershire in blue) but they were not random. In fact, they say something important about their lives. John and Elizabeth had tried to move to Nottingham between 1831 and 1834, but the death of Elizabeth in 1838 caused John to return home. After remarrying to Catherine, he came back to Nottingham between 1851 and 1857; whether this was related to the stigma of the preceding assault case and his subsequent imprisonment is just conjecture.

We’re now in a position to show a more realistic family tree for John Hammond.