We would all like to be remembered fondly by our descendants, and many of us already pass on tales and stories, either using a blog or in the oral tradition (e.g. over a family meal). Personally, I would hope that the future depiction of me is more than a mere box on a family tree with names and dates, but I'm sure there will be sources to help future researchers in that endeavour, including the usual newspaper archives but also social media.

What happens, though, when you know that the newspaper record will be inaccurate, and that your family may be misled? I raised this question several years ago, but without hinting at the reasons for asking. Rather unusually, this article is designed to fully detail specific events from 1991 while they remain within the living memory of the people involved, and so provide an alternative source.

February 1991 was very cold, and this particular day (around St. Valentine's Day) was not only icy but foggy; there was a pea-soup fog that meant you could barely see 20 feet ahead. I had driven with my girlfriend of the time, Dorothy — now my wife — to a local beauty spot called Alton Water to exercise my two border collie dogs. Alton Water is a large man-made reservoir, about 8 miles in circumference, that plays host to walkers and water sports, and I knew a back way in where I could let the dogs have a run around. Walking from the car to the water — which we still couldn't see — we heard someone calling for help in the fog. As we got closer, we realised that a man and his dog had both fallen through the thick ice on the reservoir, about 20 yards out.

The man's name was Ken Bloom, and he had tried to rescue his dog (Penny) after it ran out and fell through the ice. This was pre-mobile phones, and I knew there were no buildings close to this back entrance, even though we couldn't see much at all. If there were any lifebuoys then we couldn't see them either. This was one of those life-changing situations where you find yourself having to make a really difficult decision without daring to think it through. I decided to slowly walk out to him, all the time watching for bits of ice that looked thin and listening to it creak underneath me. I was very scared! When I got to him, I laid down flat on the ice to spread my weight and extended a hand to him. I hadn't considered how much distress he was in, though, and he yanked at my hand. He was heavier than me so I slid straight towards him and ended up in the same hole.

Things began to happen very fast from then on. We were both trying to tread water and some distant walkers could hear the cries for help but couldn't locate us. It's not possible to tread water in open wellington boots as they pull you under as you try to kick, so I had to push them off. I had been under the water a few times by now and I recall that the emerald green weed looked surreal under the diffuse light coming through the ice. But each time, I was jerked back to the reality of the situation, as though an internal voice was shouting at me: "Get out! Focus and get out!"

Few people will realise just how difficult it is to get out of a hole in the ice. As soon as you put weight on the edge, it tips towards you and you slide straight back in the hole. No wonder so many people drown under these conditions. I really thought I was going to die there, and that Dorothy was going to watch me drown from the shoreline. I had warned her to stay off the ice, but morbid thoughts were creeping into my head: am I going to go under without fuss and fanfare, or in a mad panic screaming for help? Luckily, those internal voices kept bringing me back to the here-and-now.

Ken was struggling as he was losing the use of one arm, and one side of his body was numb. The skin on my knuckles was becoming stiff and inelastic such that the skin was splitting when I bent my fingers. For some unknown reason, I had neglected to cut my nails, and so I was trying to dig them into some small cracks I had noticed in the ice. By pulling very slowly, I was making progress, but it was a helpful shove from Ken that finally made it possible. I was then back on the ice and lying on my belly.

What would you do then? I could have scrambled back to the shore and tried to find help, or I could have turned around to help my new-found friend. I did the latter! In fact, I remember thinking about the way ABS brakes work, and the difference between static and dynamic friction (I had been a physics student). I grabbed Ken's hand and told him to pull very slowly. If I started to slide then all grip between me and the ice would disappear (dynamic friction being less than static) and he would have to let go quickly, but to trust me. This was frightening because as the ice began to take Ken's weight, it started to dip and I could feel the grip starting to disappear. The last thing we both wanted to be back where we started. It took three or four attempts, but (surprising) we did it! We were both out of the water but still on the ice.

I wanted to turn my attention to his dog, who was still treading water a little further out, but the ice was very broken in that area. I wanted to help, but I knew that I would have to get back into the water, and that I had nothing left in me. Having to look away from the dog was something that will forever haunt me.

About that time, the fire service turned up and they put ladders on the ice to come out to us both and bring us back to the shore. They managed to get to the dog, but it was too late by then.

Ken was taken away in the ambulance, but I was taken to the shower facility at the reservoir and allowed to thaw myself out as I hadn't been in the water as long as him. Although not the stuff of nightmares, the events left me with disturbing dreams in which the outcome turned out differently. I revisited the reservoir the following day to avoid becoming afraid of the place, but Ken and his wife, Kate, admit that they've never returned there since. 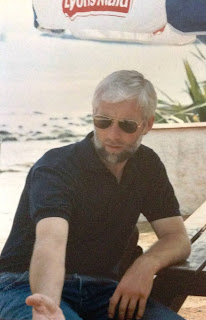 There was a small report in the local paper the following day, but my name could not mentioned as no one had bothered to take it. A close friend of mine, who worked at the newspaper, persuaded me to own up and to be interviewed, which I did, but virtually none of it appeared in the follow-up report because it didn't fit with the prior report. Unfortunately, this left the impression that the fire service pulled us both from the water, and that we were both foolish for having been near the ice at all. I didn't want to argue with this as the fire service handle events such as this on a regular basis, and have saved many lives, but I still wanted our descendants to know what really happened. 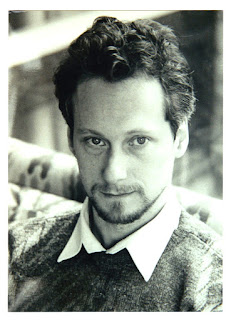 Myself, taken in the foyer of the newspaper.[2]

Some days later, Ken and Kate, bought me a replacement pair of wellington boots, and a replacement watch. The watch was a Longines "Presence": a thin classic-style men's watch that was perfect for me, but there was no way that they could have known this — it was just a wonderful coincidence, and I still wear it to this day. But the coincidences didn't stop there.

The following Christmas, I was shopping for presents in Ipswich when I started to think about him. I wanted to send him a card, and wondered if his sense of humour would appreciate a skating scene — a touch of humour can often tame the worst of memories. Having suddenly stopped in my tracks, I crossed the street to buy a card and bumped straight into him on the other side. This was one of the spookiest things ever to happen to me. The street was quite broad at that point, and I had no idea that he was directly opposite me, talking to someone else.

We have exchanged Christmas cards every year since, sometimes with skating scenes on them. I met them both face-to-face in about 2008/2009 and spent an evening recounting the events over a great meal. It'll be the 30th anniversary this February (2021) and so I felt compelled to document that day in the knowledge that it cannot now change, and that it was what it was.

[1] Displayed with permission of the family.

Posted by Tony Proctor at 15:48 No comments: