We all accept the concept of a family unit in our genealogical data, but what is it? As well as exploring the variants that exist, I want to make a case for this attempted colouring of our data being subjective and not directly substantiated by records.

The concept of a ‘family’ is impossible to pin down without some stricter subdivisions of the term. From the point of view of genealogy (as opposed to family history), it is often considered to be the parents and their unmarried children, and this has influenced the design of data formats (including GEDCOM) and the software that processes them.

However, as we all know from our own research, this is isn't always the case. One or both of the parents may be missing. The group may no longer be living together. Either or both of the parents may have remarried – bringing previous children with them. There may be older generations living with them, or siblings of the parents (i.e. aunts and uncles to the children). The guardians may be foster or adoptive parents. The biological parents may not be married, or may even have spouses elsewhere that they are trying to avoid in order to take advantage of a poor man's divorce[1].

Wikipedia nicely defines a family as a group of people affiliated by consanguinity (blood relationships), affinity, or co-residence. This includes many different possibilities in a single sentence. The article discusses some of our more common family notions, including:

Biological relationships are fixed and finite, meaning we each have just one progenitive mother and father[2], whereas all other types of relationship are time-dependent and possibly overlapping. The concept of Marriage is also dependent upon both culture and life-style so the general case of a family unit must be based on some sociological grouping such as living together.

Co-residence alone is insufficient to assume the family tag – long-term co-residents may be boarders, lodgers, or staff, or may be people forced together through necessity. You can’t even go through a census return and simply remove anyone with a role of visitor, boarder, lodger, servant, etc., because there are definitely cases where those people are part of the associated biological family. Conversely, although some members may have to live outside the household, say for work, they may still be considered family.

We can’t even assume that a family unit is a sociological group supporting each other emotionally and/or financially without knowledge of their situation. In effect, retrospectively applying this tag to an historical group may need more supporting evidence than can be yielded by birth certificates and census returns alone.

Different societies may also have different traditions or different concepts of a “family unit”, and the aforementioned Wikipedia article discusses some of these.

OK, so what’s the solution? I struggled with this in the initial design of STEMMA® but eventually decided to take a step back. I didn’t dispute the need to put people into groups but it wasn’t my responsibility to define a one-size-fits-all concept either. Instead of trying to solve this specific problem, I generalised the concept of a group in order to accommodate anyone’s definition of a family unit, or any other type of person grouping. The STEMMA Group element can have a variety of types, including the flavours of family described above, and may even be used to model custom groupings of people. A Group allows Persons to be associated with it in a time-dependent way, e.g. from the time of a parent’s marriage, or until the time of a child’s marriage. An example may be found under Data Model.

The Group syntax also allows derived groups to be created using SET operators such as Union. Do you remember Venn diagrams from school? Well, they’re a useful way of thinking about groups of people and how the groups may be used to derive other groups. For instance: 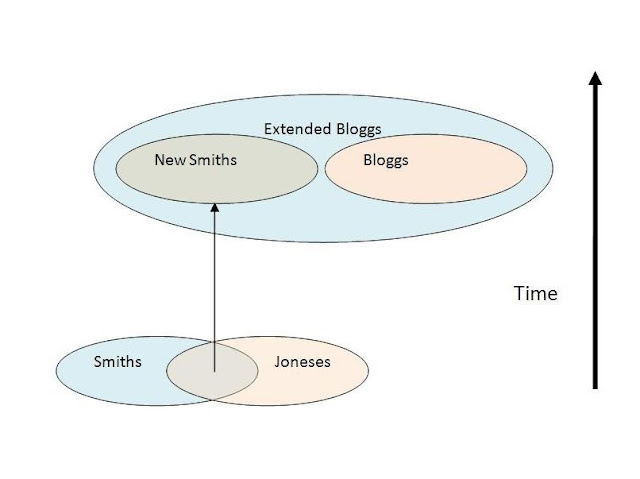 [1] In England and Wales, an act of Parliament, Offences Against the Person Act 1861, contained a clause in section.57, Bigamy, which allowed for a presumption of death if separated for seven years or more.

"Provided that nothing in this section contained shall extend ... to any person marrying a second time, whose husband or wife shall have been continually absent from such person for the space of seven years then last past, and shall not have been known by such person to be living within that time".

Lack of knowledge was all that was required here, and there was no obligation to go and find them. This became informally known as “the seven year rule” or “a poor man’s divorce”.

[2] Actually, technology is capable of engineering children with DNA from three or more “parents” (see uk-government-ivf-dna-three-people).