In the final part of this series about William Ashbee, I want to round off the story of his historic copyright case with some contextual details, including the location of his offices, the directory itself, some court transcripts, and his youngest son (also William).

The Merchants' and Manufacturers' Pocket Directory of London is a rare publication by virtue of the associated copyright case. In fact, I doubted whether any copies might have survived. WorldCat.org lists just one microfilm copy in the Duke University Libraries, North Carolina. However, that entry also includes a credit to the British Library Reference Division, Reprographic Section. I therefore approached their Rare Books and Music Reference Service and they confirmed that they do actually have a physical edition.[1] Although I have requested a full copy, they kindly provided me with the following images of the leading pages, free of charge, in order to display here. 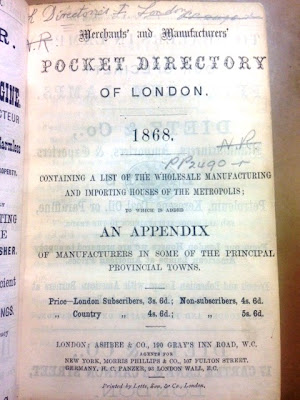 The preface was written in December 1867, although the publication occurred some time during 1868. The title page shows that Ashbee & Co. were also agents for publishers in New York and in Germany; clearly they were looking to become as successful as the many other publishers of directories from that period.

The directory’s title page also shows that their first office was 190 Gray’s Inn Road, London, and that tallies with the information presented in Part I of this series. Google Maps shows that this address still exists, although it was a café at the time of writing.

At some point after this edition was printed, they moved their offices to 32 Bouverie Street, off Fleet Street, and that is where they were when the bill was filed. I searched in vein to find an image of that street from the 19th Century. Much of it has been redeveloped but it was host to several publishers and printers at the time, including the offices of the Daily News newspaper, established 21 Jan 1846, and famous for its steadfast coverage of the American Civil War when no others saw the global significance of it. The first editor of that newspaper was no less than Charles Dickens, although his position only lasted about three weeks.[2]

In order to locate where number 32 was, I consulted a directory from 1882, and the following is a transcript of that street, running south from Fleet Street, down the west side to Tudor Street, and then back up the east side.[3]

Number 32 was still host to Thomas Murby, the previous publisher that I identified in Part I, and so the premises must have been shared with him. Interestingly, number 30 was the official address of the huge The News of the World offices until the newspaper's closure in 2011, and must have engulfed anything remaining of number 32. The following maps help to put the directory details in perspective: London, 1:1056, 1893-1895 and London/TQ, 1:1250/1:2500, 1947-1964, but they do not identify no. 32 specifically. I can infer that it was across the road from Pleydell Street, and slightly lower down, but no more.

Whilst writing this up, I found the most incredible map of the street from 1886 that showed the exact building, and even some of the internal detail. This was part of a series of fire insurance maps produced by Charles E. Goal Ltd., and it confirmed that my estimate was spot-on.[4]

While researching for this series of articles, I obtained copies of a number of documents from a file held by The National Archives of the UK (TNA).[5] These included affidavits and depositions by the plaintiff and others, and interrogatories for the case itself.

Earlier affidavits from both the defendant and the plaintiff were held in chancery files held offsite from TNA’s Kew location. These took longer to obtain and so weren’t in the first edition of this article.

These have all been transcribed and attached to this blog for future use.

Affidavit from William Ashbee, 6 May 1868, before George White.
. 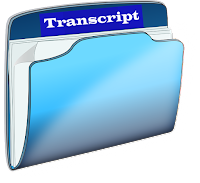 Affidavit from John Stuart Crosbie Morris, 20 May 1868, before Benham and Tindell.

Affidavit from William Ashbee, 22 May 1868, before George White.

Affidavit from William Ashbee and Lewis Simonson, 25 May 1868, before George White.

Deposition taken in the cause from John S. C. Morris and John A. Keith. Also, an affidavit from James Hutchings.
.

Interrogatories for the case of Morris v. Ashbee.

William’s youngest son, also William, was born 29 Nov 1836 in the parish of Westonbirt. The evidence for this comes from a Civil Service evidence-of-age record that contained a sworn statement by his father, made at Tetbury on 5 Apr 1861:[6]

“ 'I' William Ashbee of Tetbury in the County of Gloucester Baker 'do solemnly and sincerely declare that' I have looked at the paper writing hereunto annexed and marked with the letter "A" purporting to be an Extract from the Register Book of Baptisms in the parish of Westonbirt in the County of Gloucester and that William, the son of William and Anne "Ashby" therein referred to, is the same person as William Ashbee my Son who was born on the twenty ninth day of November one thousand eight hundred and thirty six, his Birth was never registered but <from> an entry made by my wife in a family Bible belonging to me, and <which I now> produced at the time of my ^making this Declaration^ <Birth> enabled me to speak confidently to the fact ”

William junior similarly began as a baker and grocer, and in the 1861 census both he and his father were sharing that work on Long Street, Tetbury.[7] However, on 7 May 1863, he was appointed as a ‘Lr. Cr’ [Letter Carrier] with the British Post Office in London.[8] In view of the declaration made by the father, above, and the future location of the family in London, I believe that they moved from Tetbury shortly after 1861. In c1866, he married May A[nn] Hale in Holborn, Middlesex.[9]

In the 1871 census, his occupation appears to be ‘Travellor’, residing at 9 Churton Street, St. John, Middlesex, although it’s hard to be 100% certain of the letters.[10] It does make sense, though, if we move on to 6 July 1878 when his young daughter, Annie Mary Henrietta, died of ‘Intussusception 7 days’ [telescoping of intestinal segment], aged 9, in Matlock Bath, Derbyshire, about 150 miles N-NW of that residence.[11] William’s occupation was given as ‘Publishers Agent’. Also, in the 1881 census, his wife was head of the household at 151 Church Rd, Islington, London,[12] but William was lodging with the family of a commercial traveller named Edward M. Jones at 61 Grant St, Birmingham.[13] Clearly William travelled a lot while working for a publishing firm.

William had been involved in a court case himself in July 1873, shortly after his father’s death. In that case (Ashbee v. Ingoldby), William was the plaintiff and claimed that on the 6 Aug 1869 his father had agreed with the defendants for the publication of a work in French, English, and German, to be called "The International Guide to the British, Foreign, and Colonial Manufacturers, Exports, and Shippers". The agreement allegedly noted that his father “was possessed of the requisite knowledge, information, and plant and effects for the production of such a work”, and so was entitled to the copyright. The defendants went to America in August 1869 but returned in November of the same year due to an unsuccessful outcome of the enterprise. In the mealtime, William's father had employed him to manage the business in England, which had been successful. Soon after the death of his father, he received a notice from Ingoldby that they (William Ashbee & Co., but in the name of Ingoldby & Co.) had employed another manager in his place, and substituted a Mr. Lamb for a Mr. Rest, who had retired, both without the permission of William or of a Mr. Hales (another partner). Also, having sold a first edition of the work, they were preparing to release a second. William filed for an injunction on this, and claimed, as administrator of his late father's affairs, that he was entitled to a considerable portion of the profits, and other relief. The defence argued that the agreement was vague and there was no explicit mention of copyright, and also that the plaintiff had delayed too long before coming to court. The Vice-Chancellor (Sir. John Wickens) sided with the defence and dismissed the motion, but without costs.[14]

So, had the bankrupt Ashbee & Co. been replaced by a “successful” William Ashbee & Co. before the coup d'état? The “Mr. Lamb” sounded like one of the defendants in the Morris v. Ashbee case described in Part II. A quick search revealed that he was that same Alexander Lamb, and in 1876 he was then a member of the publishing firm of Ingoldby & Lamb, of 3 Whitefriars Street, London.[15]

William’s wife, Mary Anne, died in c1890 in Islington aged 47,[16] and the Electoral Registers for 1889 & 1890 confirm their address as 24 King Edward’s Street, Islington.[17] NB: Women did not have the vote at that time and so her absence from the register is not evidence of her death. In 1901, he’d moved to Nottingham and was living in the household of his widowed sister, Emma J. Stanton, at 37 Lavender Street.[18] William’s occupation was then given as ‘Pensioner Civil Service’. In 1901, he was still living with his widowed sister but at 42 Norland Road: the household of her son-in-law.[19] No occupation was given.

William died at some point after this but it wasn’t obvious where; it wasn’t in London, Tetbury, or Nottingham. The clue finally came in the form of a minor court case in Yorkshire. He was charged with obtaining £3.3.0 by false pretences, and committed on 9 Oct 1895 at Halifax. He was later acquitted at HMP Wakefield Prison Sessions on14 Oct 1895.[20] The notes describe him as: a ‘Baker’, 5' 7 ¾" tall, grey hair, and with an abscess scar under his left arm. I therefore looked for his death in the county of Yorkshire.

The spelling of his surname is considerably less common than the “Ashby” form. However, fate was determined to make me pay twice as much as I wanted to for a death certificate — probably as punishment for my lack of humour in Parts I & II. You see, there were two William Ashbees, both died in Yorkshire, in the same year (1907), and at the same age (70). Honestly, you couldn’t make this stuff up. The correct one of these recorded that he died 24 Jan 1907 at 48 Cannon Street, Glasshoughton, W. Yorkshire, aged 70, of ‘cerebral haemorrhage’.[21] The informant was J. R. Ashbee [son] of 151 Barnsbury Rd, London, who was in attendance., and William’s occupation was recorded as ‘Commercial Clerk’. The other death certificate was for a silversmith in Ecclesall Bierlow.

Note that the eldest son of this William was the William Henry Ashbee mentioned in some detail in the previous articles: A Life Revealed and More of a Life Revealed, thus connecting the details of this family up to the current generations.

It seems that the Ashbee family did not succeed in publishing to the extent of some other firms; they were hit by too many tragedies and misfortunes. But supposing they had succeeded — what would the effect have been on the family, the publishing world, the legal world, and even the digital age?