MetaProxy was introduced at the start of 2019 as a free tool allowing meta-data such as archival descriptions, search terms, provenance, and even transcriptions, to be associated with images and other data files in your genealogical data. This article describes the new features in V3.0 of the Windows edition; these do not apply to the Mac edition.

Although the program has a small following, it is not yet well-known, and is not even considered a "genealogical tool" in some quarters. However, following some recent work to fix reported issues with Windows 'Photo Viewer' and the 'Photos' Store App under Windows 10, it was decided to give those users more control over their layout.

To re-iterate some previous details: the program and a PDF guide can be downloaded from:

The Mac version has its own Dropbox folder, but the associated Facebook support group deals with both editions: https://www.facebook.com/groups/541621946332678/.

So What is New?

A particularly useful feature of MetaProxy turned out to be its collection feature, where double-clicking on a root buddy file would automatically open up a series of image data files and their individual buddy files. The new INI-file setting of Collections=False can be used to turn this off if required (the default is True), but this also allows the use of a different file type for such root buddy files. We'll here talk of *.coll for root buddy files and *.meta for normal buddy files, but the actual file extension may be chosen by the user.

Because of the similarity between the display of a collection and the use of a traditional photo album, a tiled mode has been implemented. This is controlled by two new INI-file parameters: TileH and TileV, which specify, respectively, the number of horizontal and vertical tile positions over the screen area. If both are zero (the default) then tiled mode is disabled, otherwise each will default to 1 if unspecified. This mode employs overlay mode for individual buddy files, and so it overrides any separate SideBySide setting.

If the root buddy file of the collection example in the original article (RisalpurCemetery.meta) is renamed to RisalpurCemetery.coll, then the INI-file might specify a grid of 3x2 for the display as follows:

This would then result in a layout similar to the following, where each individual image data file is overlaid with its specific buddy file, and the original root buddy file (if it has no data file of its own) is tiled separately: 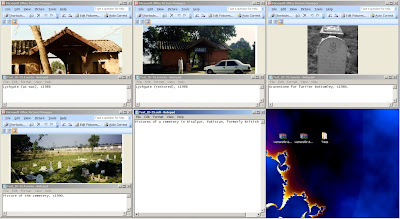 But the tiled mode is not just for collections. If a normal buddy file has multiple data files associated with it then they can be tiled in a similar way. For instance, given a buddy file called Test_ID-34.meta2 that's associated with two separate images (a *.jpg and a *.jpeg file) and a Word document (*.doc in this case), then an INI-file setting of:

would result in the following layout: 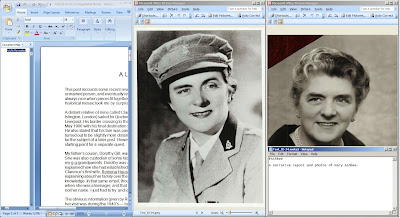 This shows the Word document and the two images spread across the width of the screen, and the buddy file overlaid on the last of the images. Where people have larger screens than the one used in this example then this becomes a convenient way to see all of the related details.

NB: if you're using the normal overlay mode (SideBySide=False setting) then specifying TileH=1 or TileV=1 will force the image viewer to occupy the full screen area rather than its default size and position.

While developing this tool, it became clear that Microsoft has a variety of ways for launching the viewer for data files (e.g. image viewers), and no central mechanism for finding their main windows. For instance:

1.    Normal process creation for the image viewer (or document viewer). The handle of its top-level window is then determined. Most cases fall into this category, including Microsoft Office Picture Manager, Microsoft Paint, Microsoft Word, and of course the Notepad text editor.

2.    When launching the viewer, the data file is simply handed over to an existing instance of the program, which then creates a new tab for it. Adobe Acrobat and Web browsers are examples of this.

3.    When the viewer is actually a DLL rather than an EXE, it has to be loaded into a special 'container process' called dllhost. Windows 'Photo Viewer' is an example of this.

4.    When the viewer is one of the cut-down 'Store Apps' available under Windows 10 then it follows a different set of rules, and the normal Windows APIs have limited accessibility to them. 'Photos' (aka 'Microsoft.Photos.exe') is an example of this.

Note that if the data file is shown in the tab of a single-instance viewer (case 2) then the tiled mode mentioned above will not work as intended since the viewer cannot occupy more than one tile location.

In the event of problems being reported within the Facebook support group, a diagnostic log file can now be generated via the program copy called metaproxy-D.exe (also available from the same Dropbox link).

These log files should be emailed to the author in order to assist in a resolution. There's a 'Contact Form' in the right-hand panel of this blog-post.