When a Place Unlocks a Bit of History

This small post recounts a heart-warming case where knowledge of a place unlocked a bit of family history, and painted events in the lives of my parents and their friends that no document could ever yield.

I have long held that a place is more than just a name, or even just a string of jurisdictional names; it has a history and properties all of its own. I have written many posts that have tried to get this message across — often focusing on the legacy of the GEDCOM model — and have even devised a research data model capable of recording the history, documents, images, name changes, and connections of a place in a fashion analogous to that of persons.

My parents, Stan and Ann, were young when they married: my mother was only 17, and she had me by the age of 18. My father had just completed his two years of National Service when he took a job with Nottingham knitwear manufacturers Harry Prew-Smith Ltd, and it was here that he and my mother first met. They were married towards the end of 1955, but he left that job after less than a year to try and find a better one. He tried working on the railway, first in a shunting yard and followed by a spell in the parcel yards (about seven months in all), after which he tried selling vacuum cleaners and then brushes (about six months in all). He then took a job with Stanton Iron Works but had to give it up after about ten months because of knee problems. He often told me how the heat and heavy manual work there was extremely tough, and how he would come home soaked in sweat, but with not an ounce of fat on him — he weighed less than ten stone when he left. But he then blagged his way into a cooking job, based almost entirely on what he had learned during his National Service. This was certainly not the end of his job-changing but it will suffice to set the scene for this article.

I still remember the St. Ann's district where I lived until the age of five, and where my grandparents continued to live after that. It consisted of Victorian back-to-back terraced houses with little if any amenities: no hot water on tap, no central heating, and no inside toilet. The district had a reputation, but it also had a community — something sadly lost when the slum-clearance programs of the 1970s not simply demolished the houses, and dispersed the residents, but also tore up the streets to lay down different ones. This left people clinging to their memories of that community and any old photographs because there was virtually nothing left that they could point to and identify with.

Facebook groups can be a great comfort to such people, and I was a member of several groups that shared photographs and memories. It was here, in 2018, that I connected with David Marriott, a man who remembered my parents, and my father's family. He even admitted to a romantic "fling" with my father's younger sister, Gill, and that she had a best friend, Christine Broadley, whom she went everywhere with; the pair even dressed the same. He recalled that my father and his younger brother, Ray, were older than him, but my cousin (also a David) was about the same age. There was a youth club — the Sycamore Youth Club, run by an Eric Wheatley — on Lavender Street, and my father and cousin used its basement as a gymnasium since it had the weights and other equipment down there.

He then shared a photograph of himself taken in about 1957; he knew it was in my "mother's living room", but not really where or by whom. 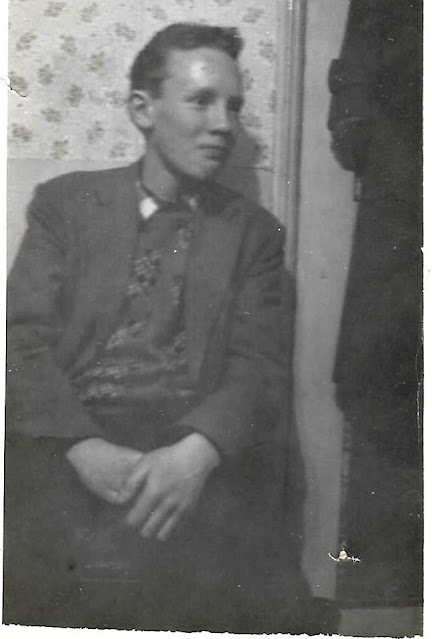 Figure 1, David Marriott, around 1957, displayed with his kind permission.

I took one look at the awful wallpaper behind him and thought 'I know that pattern. I've seen it before somewhere'. So I went through my own photograph collection looking for something similar, and came up with the following: 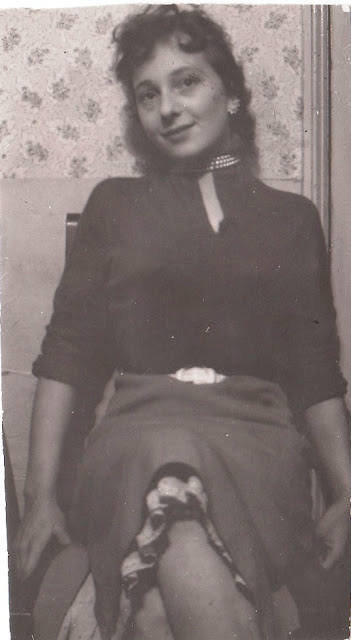 A closer match you could not find: the wallpaper is the same, the seat and cellar door (to the right) are the same, and the lighting is the same. The picture of my mother was taken by my father with a homemade pinhole camera (real ones were very expensive back then), at 9 Manning Grove, Nottingham, and developed by himself. David's picture was not only taken at exactly the same place but probably on the same evening, too.

My grandparents lived at 15 Manning Grove, and 9 Manning Grove was the house of Keith Walker, which my parents rented for about a year. My mother and Keith Walker's wife used to make the tea at the gymnasium.

That was enough to jog David's memory. "Goodness," he said, "I recognised her straight away". He recalled that my father was working night shifts at Stanton Iron Works, and so she was on her own, except for yours truly who was only about one year old. Because she was a bit lonely and scared in someone else's old house, David, Gill, and a few more friends used to go round to keep her company, eat chips (that's "fries" to my American friends) and drink all of her tea. I passed these recollections onto Gill, my cousin David, and my mother (my father having sadly died a few months earlier) and they all wanted to know how the others were doing. My mother said they used to have a great laugh on those late evenings, and it really helped a young mother cope.