In these days of massive transcription projects for historical newspapers, genealogists have realised just how much of a goldmine they are for micro-history, in addition to national or global history, but what does the future hold for them?

NB: This article is written from personal knowledge of British and Irish newspapers, and presumes that there are similar issues elsewhere. 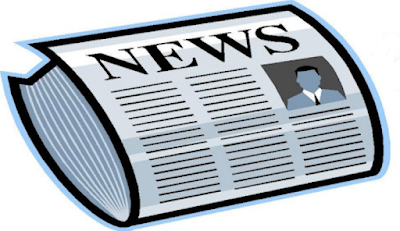 I have found the material in old newspapers invaluable for reconstructing ancestral history, and not just for reconstructing families. For instance, articles such as A Sad Career have received very positive feedback from people involved with these projects, and from companies hosting newspaper databases. This style of research is akin to journalism, but is more accurately a form of meta-journalism that puts together an historical account from multiple journalistic articles of the time.

One of the biggest facilitators of this, for me, has been the British Newspaper Archive (BNA), which has transcribed an enormous number of national, regional, and specialist papers. They weren't the first, though, and my earlier research relied on the Gale database of '19th Century British Library Newspapers’, which used to offer free online access (i.e. connectivity from home) through libraries. The Gale database is now almost impossible to find because it has been displaced by the BNA database. Libraries found it cheaper to include BNA access, and yet the agreement was not the same: access requiring you to be physically present in the library.

Another difference is the available search operators. Finding specific material needs search operators that allow you to precisely specify your subject matter, and eliminate stuff you're not interested in. This is crucially important if your subject of interest just happens to contain words that appear in a different but more-prevalent context. To this day, the Gale search operators were better, but the range of newspapers is far better in the BNA. Unfortunately, the more relaxed search criteria of engines such as Google have set a trend that means you are more likely to be deluged with the wrong stuff. In essence, you're invited to enter a bunch of words and some software algorithm then decides which search results would be more appropriate.

But what do we mean when we say micro-history? Well, papers from the 19th century reported much more local news than modern papers do, and regional papers would often cover every little misdemeanour, transgression, accident, celebration, or other event. There was a very high chance of finding references to an ancestor, their family, or even something happening on their street; the events did not have to be of national importance. This provides a very rich substrate in which to find events of their everyday lives, and local events that may have affected their lives. For instance, in Jesson Lesson, a case is made for the movements of a family having been forced by industrial strife and change in the work of framework knitters.

In Where is Nottingham Castle?, an account of riots that destroyed the Castle was wholly constructed from newspaper accounts, leading to a follow-up article revealing the life of one poor sole who demonstrated such bravery on the gallows in the aftermath.

This degree of detail persisted into the early 20th century, but it can be seen to be diminishing after WWII. This is where the future becomes uncertain for newspaper archives because the BNA has only transcribed to about 1950, and I am trying to get a statement about why this is so, or what the future intention is. I am sure I recollect a comment that copyright is an issue, but I have no record of this that I can cite. Assuming that the BNA will transcribe more recent editions, and so document the more-modern events that directly affected our own lives, then the papers will not be the same

Many papers have since been consolidated such that the remaining local papers are usually no more than free papers containing less news than advertising. The real newspapers have become bigger and so much more focused on national and global events. They are not going to send reporters into the inner-city streets, or out into the provinces, unless there is a fairly big or important story to capture.

But the nature of the papers has changed in addition to their ambit. Many national papers now have their own digital archive, which could make the work of non-proprietary archives easier — assuming they want to extend their range, and that some agreement could be reached in sharing the data. A more subtle change has been the shift from objective news to opinion: editorials are bigger and each paper has a significant letters page for public opinion. This is interesting because future researchers will no longer be building opinions of their own solely from newspaper accounts (whether subjective or not), but will have to consider opinions of the time. These will clearly be very subjective, and so requiring a more critical eye, but it can be argued that they will give a multi-dimensional perspective.

So, if our existing newspaper archives later cover years beyond 1950 then we are not going to see the same level of detail since there will be fewer papers, and a gradual loss of micro-history. We can expect to see coverage of the race riots through 1950s Britain, and the social, political, and cultural changes that we now think of as the "sixties", but not the fact that your ancestor was fined 6 shillings for making a noise after leaving the pub in a state of intoxication, or someone on your ancestor's street was in court for not emptying their "night soil" correctly.

If not in the papers then where might future genealogists look for micro-history? A strong candidate would be social media, although far from being objective. Unfortunately, much content of this ilk is considered ephemeral and transient, and may never be preserved. Even comments on special-interest groups are unlikely to get saved (remember Google+?) and so the future looks grim for our inconsequential trivia, but this is likely to be a future blog topic.

[Edit 22 Dec 2021: After three exchanges with BNA, trying to get a statement on the coverage of further dates (beyond 1950), I gave up. They sent me stock replies about covering more titles, and also suggested contacting the British Library for editions they don't yet cover, but seemed to miss the fact that this was for an article actually about newspaper archives.

However, looking at their knowledge base, it seems that copyright is supposedly a problem: "We currently have more newspapers from the 1800s than the 1900s because we need to get permission from the copyright holders to publish more modern content. We are constantly working on this, so over time, you will see more appear." I can understand that each batch of new dates has to be agreed with the copyright holder first, but this does not really explain why there are virtually no editions of any paper after 1950.

[Edit 23 Dec 2021: Aha, someone finally understood. Here's their full reply: "I've done some digging and spoken to the team to try and get a bit more information so I hope the below helps: Copyright around newspaper content is complex. There is not just the ownership of the content that the publisher holds to consider, but the nature of the material within the newspaper itself like adverts, photographs, illustrations and other content. When it comes to more modern newspapers, such as those from the 1960s and 70s, we work with current copyright holders and publishers of those newspapers and they are the ones who decide what we can publish on The British Newspaper Archive as they are the ones who will hold copyright on the digitised newspapers that we add to our Archive. When it comes to adding more modern content from newspapers we have already digitised it just comes down to the nature of our agreement to publish the newspapers in our Archive with the current copyright holders AKA the publisher, which can differ from publisher to publisher." This still doesn't explain why it seems to be across the board (i.e. all titles), unless the consolidation I mentioned means there is only a very few copyright holders involved.]