A Grave Too Far


My granduncle died in an area of British India which is now within Pakistan. At the time of writing, the UK Foreign and Commonwealth Office (FCO) were advising against all travel to this area[1], so how much could I find about his death without a visit?

Albert Edward Rowland was my mother’s uncle. I was told by his younger brother, George Rowland (now aged 87), that Albert died in Peshawar, near the eastern end of the Kyber Pass, aged just 23. Peshawar was the capital of what was the North-West Frontier Province (NWFP) of British India. It became part of British India in 1849 following the Second Anglo-Sikh War, and later became the frontier headquarters from 1868. It was always a very troubled region because of its strategic location between South Asia and Central Asia. In 1947, when the British ended their rule in India, this region was incorporated in the newly-created state of Pakistan.

George provided me with a photograph of Albert’s headstone but he had no details of Albert’s death. He recalled Albert had been stationed in Egypt and returned to the family home in Nottingham over Christmas 1933, only to be posted out to India the next day. He believed that Albert was killed during an ambush but he had no evidence for this. 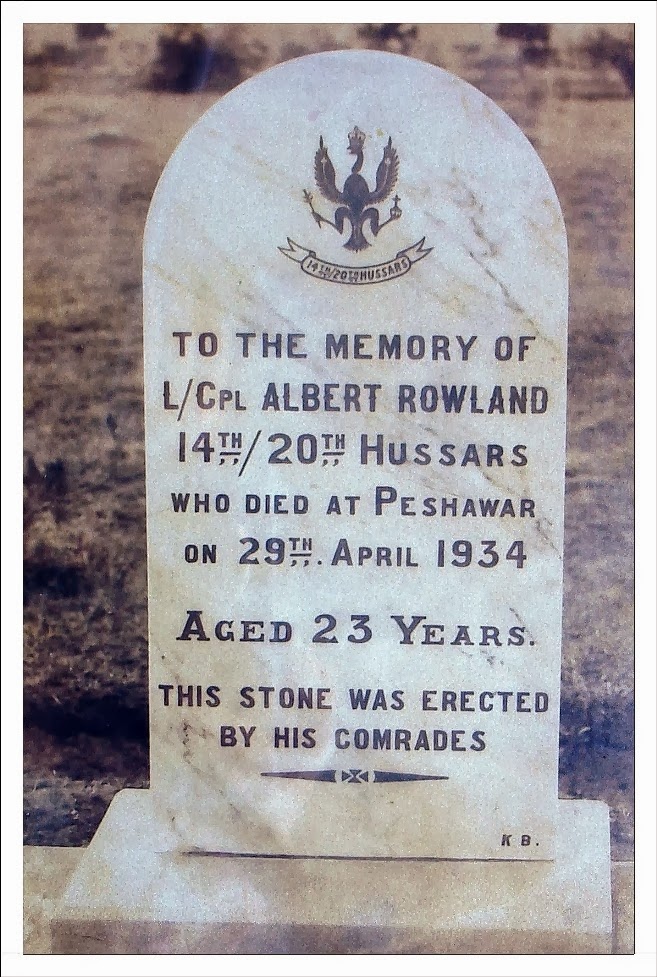 The thing that struck me about Albert’s headstone was the last part of the inscription:

To the memory of L/Cpl Albert Rowland. 14th/20th Hussars who died at Peshawar on 29th April 1934. Aged 23 years. This stone was erected by his comrades.

Many soldiers lost their lives so why would Albert have a headstone erected by his comrades?

Albert was born 2 Mar 1911 in Sneinton, Nottingham, England. He managed to make an appearance in the 1911 census[2] aged just one month. He was then living at 103 Clarence Street with his older brother, Benjamin (my grandfather), and his parents, Albert and Gertrude, who had been married for two years.

The first thing I did was to get a copy of Albert’s death certificate[3]. This confirmed the death occurred at the British Military Hospital, Peshawar, and the cause of death as ‘Cerebral Haemorrhage, result of motor accident’. It also gave his rank as Lance Corporal in the 14th/20th [King’s] Hussars[4], and his service number as 551091. Interestingly, the registration of the death was on the same day but in nearby Risalpur rather than Peshawar.

The next item of information to obtain was a copy of Albert’s service record[5]. This was short since he was such a young man when he died. He had been an ‘Electrical Storeman’ when he enlisted on 5 Jan 1931. He was appointed Lance Corporal on 4 Apr 1933, aged just 22, so he was doing very well. In fact, his record was full of glowing phrases such as ‘Clean hard-working’, ‘A good man’, ‘Clean & smart & good worker’, ‘Very promising NCO, gaining confidence’, and ‘Honest, sober, hardworking, intelligent’. His postings were:

Unfortunately, there were no additional details of his death. 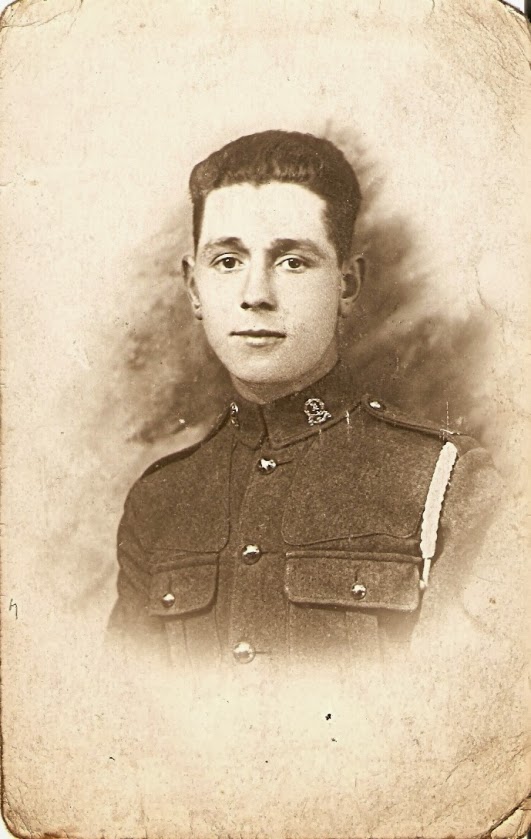 I managed to find the following mention of his regiment moving to India in the Times newspaper[6]:

The 14th/20th Hussars from the Cairo Cavalry Brigade arrive at Karachi today in the transport Nevasa. The regiment will go by rail to Risalpur, and take up duty in the 1st Cavalry Brigade on Thursday in relief of the 15th The King’s Royal Hussars who leave Risalpur on Friday to embark for home.

Searching specifically around the date of his death, I found that the accident was covered in several of the British newspapers. It’s hard to determine which of those reports are derivatives but the following summarises the material in the reports I consulted[7]: On Sunday 29th April 1934, a disastrous motor accident occurred when a lorry carrying troops collided with a tree on the Grand Trunk Road from Peshawar to Lahore, near a small town called Pabbi. Two soldiers died the same day (L/Cpl Albert Rowland and Farrier Bottomley) and 12 others were injured. L/Cpl W. Newland died the following day. By the Thursday, four were still on the danger list, and five others were still in hospital. All soldiers were in the 14th/20th Hussars, stationed at Risalpur near Nowshera.

I wasn’t very familiar with this region so I used Google maps as a guide:

You can see that the Grand Trunk Road leaves Peshawar from the east and heads towards Nowshera, about 43km away. The town of Pabbi is about 25km outside of Peshawar. Risalpur is about 15km north of Nowshera along the Nowshera-Mardan Road. My guess is that the troops had been off-duty in Peshawar over the weekend, and were returning to their base in Risalpur on the Sunday evening — possibly in the dark — ready for resumption of duty on the Monday. Although the Grand Trunk Road is a fine road nowadays, it would have been little more than a dirt track back then, and a pothole in the dark could easily have caused this accident.

At this point, I didn’t know where Albert was actually buried. This was a concern because some of the cemeteries in that region were in a very bad state, such as the Tehkal Cemetery in Peshawar which had suffered from neglect, desecration and vandalism. A worse example was the British Soldiers' Cemetery, Lower Topa, Murree Hills, where bulldozers were destroying parts of the cemetery and disinterred coffins were lying exposed. I obtained a copy of a published survey of the Peshawar Cemetery by Susan Farrington[8] but this contained no one with the surname Rowland, thus suggesting that he wasn’t buried in Peshawar.

I then looked at the India Office Records collection held by the British Library using their online Family History Search aid[9]. This gave the location of the burial as ‘Risalpur (C of E)’. However, I still couldn’t precisely locate the Christian cemetery in Risalpur.

I then contacted Dr. Rosie Llewellyn-Jones of the British Association for Cemeteries in South Asia (BACSA). This organisation has been recording the locations of cemeteries and monuments — British and other European — and the inscriptions on headstones, since 1977. She suggested I contact the Asia, Pacific and Africa Collections (APAC) department of the British Library who held a BACSA file on Risalpur. Dorian Leveque, of APAC, not only located Albert in a photocopy of the burial register from the Garrison Church (St Mary’s), Risalpur, but sent me a copy too. The Risalpur Cantonment was a military barracks to the left of the Nowshera-Mardan Road when heading north out of Nowshera towards Risalpur. To the right of the road is an associated cemetery, just over the railway line. The Cantonment is still used by the Pakistan Army, and the cemetery is apparently still open (last burial in 1969 according to the photocopied register) and well-maintained.

Near the end of the burial register[10] were the entries for all three of the soldiers who died in that road accident:

On passing this information back to Dr Llewellyn-Jones, she put me in touch with Susan Farrington who had surveyed that cemetery in 1982 (see note [8]). She confirmed that when she was last there the headstone was still standing and the inscription was clearly readable. Not only that, she shared a photograph she had taken of the cemetery, and ones of its lychgate before and after it was restored. Prints of these I promptly shared with Albert’s brother, George.