Making transcriptions of records is not as common amongst genealogists as you might expect, but why is that? What do we need in order to create useful transcriptions? If we’re part of the minority who do make them then where should we attach them?

Because of the availability of online data sources, and the ease with which digital copies can be created (owner permitting of course), many people believe they do not need full transcriptions of records. They might claim that since they can visit an online image, or they have a digital scan in their own data collection, then they can read it perfectly well without having it typed out. Whether it’s a baptism entry, a newspaper report, or a census page, many genealogists therefore find they have a growing collection of equivalent JPEG files sitting on the periphery of their data.

What I mean by this is that such a file can be pointed to, or referenced, by other data, but it cannot reference anything itself[1] or be textually searched. This means the information is not truly integrated into your data. The arguments for adding mark-up to a transcription in order to achieve this are almost exactly the same ones that I made for using mark-up in authored narrative at Semantic Tagging of Historical Data. This allows, for instance, references to people, places, events, dates, etc., in that transcription to be connected to the relevant entities in your data.

A transcription requires more though. It also requires a way of indicating transcription anomalies — parts that deviate from the normal flow — such as marginalia, footnotes, interlinear/intralinear notes, struck-out text, and uncertain characters or words. Both the uncertain characters and the uncertain words may require annotation to provide suggestions and possibilities, both of which must be honoured during searches. A transcription also requires an indication of any original emphasis, such as italics or underlining. NB: the original use of italics, underlining, footnotes, etc., in something being transcribed is different to their deliberate use in a written report, and so must use a distinct form of mark-up.

Traditional editorial notations for transcriptions are not well-suited to digital text as they do not facilitate efficient and accurate searching. TEI has comprehensive sets of mark-up for handling transcription issues but falls short when applied to genealogical data, and probably historical data in general. It is certain that some specialised mark-up is required, but how you visualise a transcription on-screen is a separate consideration. The same mark-up could alternatively show multi-coloured and hyper-linked text, or the plain editorial notation. That sort of flexibility only comes from using a computerised annotation rather than human annotation.

The fact that both transcription and authored narrative may co-exist in the same written report led to STEMMA® unifying them in its own mark-up. Those distinct usages — for transcriptions and for generating new narrative (e.g. essays, reports, inference, etc.) — have some similar and markedly different characteristics as follows:
Actually, transcription isn’t just an action associated with a manuscript or typescript document; it could be associated with speech too. In those circumstances then it must reflect speech levels and emotional emphasis, but I haven’t even thought about that field yet.

As you can imagine, in order to generate a quality transcription, and to incorporate semantic links and annotation, a very good software tool is needed. It would be something like a specialised word-processor tool, but most of us are left using general-purpose word-processor tools that have none of the required facilities. This will be a secondary reason why so few transcriptions are made.

So where do I attach transcriptions in my own data? In order to explain, I first need to convey something of the structure of my data. 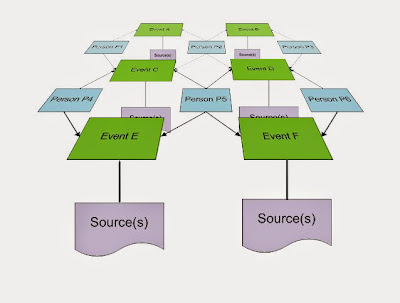 This simplified view of the rich connections in the STEMMA tapestry doesn’t show its places, or groups, or lineage links between people, or hierarchical/protracted events. That would be too complex! What it does show is a network of multi-person events and the relationship of sources to those events. Notice that the sources are attached to the events, and not to the people. As already explained in Evidence and where to Stick It, the vast majority of our evidence – if not all of it – relates to events; things that happened in a particular place at a particular time. In other words, our entire view of history rests on discrete and disjointed pockets of evidence describing a finite set of events. Everything else is inference and interpolation creating as smooth a picture as we can.

So what is the general form of these underlying source entities in the data? Our real-life sources may be remote, such as a document in an archive or a book in a library, or local, such as a family letter or a photograph. In both cases, we may have a digital scan of the items. STEMMA[2] has two important concepts that it employs for sources:

Either or both of these may apply, therefore. A full transcription would be associated with the Resource entity that would describe any physical or digital edition of the associated material. In the case where you may have transcribed a document in an archive, or even from one of the online content providers, the transcription should still be placed in a Resource entity rather than a Citation entity, even though the latter is possible.

Genealogist Janice Sellers, in her blog-post at Transcription Mentioned on Television, explains how transcriptions of documents are valuable for sharing the details with family and friends. She recounts how she tried to convince a well-known British TV program to advise their guests to make transcriptions of their historical documents and heirlooms.

STEMMA’s mark-up is primarily about semantics. Shallow semantics would mark an item as, say, a person reference but without forming a conclusion about who the person was. Deep semantics involve cross-linking references to persons, places, groups, events, and dates, to the relevant entities in your data. I have previously tried to convey this using the worked example of an old family letter at Structured Narrative.

Genealogist Sue Adams has taken the concept of semantic mark-up in transcriptions to a deeper level on her Family Folklore Blog. Her worked examples clearly demonstrate the temporal nature of historical semantics. Anyone with a passing interest in the Semantic Web and RDF is encouraged to read about “temporal RDF” and consider why it doesn’t yet exist. You may find a lot of theoretical work that considers things like temporal graphs but very few real examples like hers. In an ideal world, the developers of such technology would be working closely with the people who need to utilise it.

[1] I’m ignoring the issue of meta-data held within an image until a future post. The issue here is one of the text in an image making discrete references to its subjects rather than anything to do with image cataloguing.
[2] STEMMA V2.2 — which includes important refinements here — has just been defined but, at the time of writing, I am still preparing to painstakingly update the Web site. The landing page will indicate when this is complete.
Posted by Tony Proctor at 22:24