In the episode of Mondays with Myrt from 15 Sep 2014 (timestamp 41:30), the subject of incidental people came up. These are the people who are mentioned in some historical source but who are not known to be related to you. The question was posed: if your software accommodates unrelated people, do you fully record the details of those incidental people, and do you create an associated Person entity?

These are actually separate questions because you could simply record the names, and other details, of those people, or you could enter them as full Person entities, just like the other individuals in your family tree. 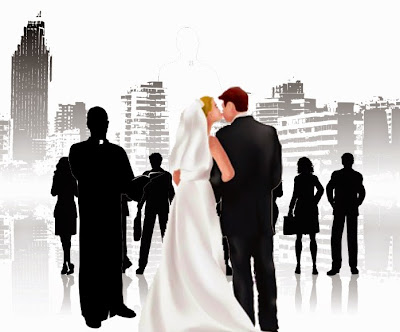 There are several aspects to this topic that are worth exploring, though, as they show it to be part of a bigger issue. For instance, if you record such details then you want them to be searchable. Back in Ancestral Context, I recounted how the witnesses at the wedding of Henry Woods and Sarah Roomes were Charles Woods (Henry’s older brother) and a Sarah Oxlade. It wasn’t until sometime after I’d identified that wedding that I realised Sarah Oxlade not only married Charles but that they were married at the same time and place as Henry and Sarah Roomes; thus making it a double wedding. If you were forced to record incidental people in a simple plain-text note then that would not be searchable in most products, and you might fail to make a similar connection.

Of course, not every unrelated person is incidental; some may be very significant from a family-history point of view. Also, not every person can be classified as related or unrelated since we may not have identified them yet from the reference in the associated source. This is important because that person reference — sometimes described as an “evidence person”[1], or a persona — cannot be represented as a full-blown Person entity in your data until you have an idea who it describes.

Let’s take a moment to look at these different cases and what support they might require:

In effect, there are really just two requirements here: either the person is represented as a full Person entity, or we simply record their source details. Those details may later support an association with a Person entity if, say, an incidental person turned out to be significant (as above) or an uncertain person is eventually identified as related.

STEMMA has always supported disjoint trees and so has no problem with representing significant unrelated people. It also provides a means to describe a person reference, from a specific source, using an extensible set of Property values such as name, occupation, and place of residence. However, there was a problem.

This diagram first appeared in The Lineage Trap and shows the sets of person Properties being associated with the link between the respective Person and the shared Event that was supported by the source. Whether they were physically stored in the Person entity, or in the Event entity, or in something separate that connected them, shouldn’t make a difference given that software can elect to display a different view of the same data; or so I believed. I was actually storing them the Person but I had failed to consider that this being a “conclusion person” (i.e. constructed from the aggregate evidence) meant that I was jumping the gun. It was forcing me to make an association between the person reference in the source and a specific Person entity. If I wasn’t sure of that association then it was hindering me.

It also meant that I was usually forced to create a full Person entity for incidental people; the exception being the case of narrative text. When dealing with a transcription, for example, STEMMA’s mark-up allows me to represent incidental or uncertain people quite easily:

This small bit of code marks both names as person references, but it additionally links the first to a Person entity called ‘pCharlesWoods’. No association is provided for Sarah. These separate cases are referred to as deep semantics and shallow semantics, respectively, in the STEMMA documentation. There are also equivalents for the other types of subject reference, such as those for places and for groups (e.g. regiments, organisations, or clubs).

This latter point is also important because I had the same issue with Property values in my Place and Group entities as in my Person entities. If you imagine Person being replaced by Place, or Group, in the above diagram then the set of Property names would be different but the problem was the same.

As of STEMMA V3.0, Property values were moved to the other end of that connection, into the Event entity, and into a new element, of which there was one for each supporting source.  That element contains a sub-element for each individual subject reference in the respective source. These elements not only contain the Property values, as described above, but can also have relationship connections between them.

This diagram is a little busy to let me try and break it apart. It depicts, in greater detail, the new structure for the shared Event-A shown in the previous diagram. Its two supporting sources are now shown separately, and each has a corresponding References element. In this illustration, one of those References elements describes two person references and two place references. Let’s suppose that the supporting source identifies both of the people by name, indicates that they are related (e.g. a married couple), and indicates that they have the same residence address, but only one was physically present at the place of the event. Each PersonRef and PlaceRef encapsulates the relevant Properties extracted from the source, such as their names, but also depicts the relationships between them (the dashed lines in the diagram).

Now all but one of those four references has been associated with a corresponding Person or Place entity. The remaining person reference remains in this evidential form, and it is this mechanism that I would now use for incidental or uncertain references; whether of people, places, or groups. It would be equally possible to describe these two persons, their spousal relationship, the two places, and the relevance of those places to the people, but without ever connecting them to full-blown Person or Place entities. It is, therefore, quite a powerful way of representing digested information from each source.

A consequence of this redesign is that the PersonRef element is now basically a persona, although it is not described as such because the concept has been generalised to include the PlaceRef and GroupRef equivalents.

Note that just as the Property values are extracted and summarised items of information from the source, and so are subject to analysis and assessment, so too are the relationships between the subjects. Just because a source says that a woman’s relationship to a man is that of “wife” doesn’t actually mean they were married, and an example of this very case can be found for William Elliott and Sarah Woods in the 1881 census of this STEMMA example. A more comprehensive coding example that deals with relationships may be found at Census Roles.

[1] Whether these are considered evidence, rather than simply information, depends on whether you consider them to substantiate the existence of an associated individual. The use of the informal, and contentious, terms “evidence person” and “conclusion person” has recently been debated within FHISO.
Posted by Tony Proctor at 20:10