I want to briefly revisit the life of the infamous Henry Pearson, as presented in A Life Out of Balance, before I then take a look at the life of one of his sons: Frank Belshaw. There were some striking parallels in their lives, and some considerable deceit and lying in the records.

Up until December 1913, Henry Pearson had clocked-up 87 convictions, but then they stopped. The next newspaper reference to him that I found, before his death in 1938, was of a court appearance in 1935 where he managed to hoodwink the magistrate into believing that the drunk-and-disorderly case was his first court appearance, and the case was dismissed.

My article caught the eye of another researcher, John Ellis, who was also interested in this Nottingham family. He pointed me to a further newspaper article — one that I’d missed — from 1917 that appeared to show Henry being prosecuted by the army (Notts. Territorial Force Assoc.) for fraud, and that he was using the alias of William Clayton. Was it him, or was it a coincidence? The article indicated that this Henry, of 3 Haywood St., Sneinton, Nottingham, was formerly in the “Robin Hoods” (7th Battalion, The Sherwood Foresters) but later transferred to the Royal Defence Corps (RDC), and in consequence that this caused some confusion over his financial position. He claimed that the army owed £70, £80, at least £90, and maybe £150 — causing some laughter in the court — and that he was in debt to the amount £21 7s. 2d. On his discharge, with “good character” but as “medically unfit”, his wife, Rebecca did not return the correct paperwork and they continued to draw a “separation allowance” of £1 3s. per week. The case was eventually dismissed as it was decided that the army had made errors allowing the money to be drawn.

Well, Henry and Rebecca are the right names, and the town (actually a city since 1897) was correct, but the street address wasn’t a known one associated with Henry. Just to be sure, I looked for his service record. The service record for William Clayton (regimental no. 1334) showed him being a labourer attested to the ASC (Army Service Corp), via the Territorial Force, for “One Year's Embodied Service at Home” on 26 Sep 1914, and discharged 91 days later on 25 Dec 1914 through “T. F Regs.” (Territorial Force Regulations) 156(v): "not being likely to become an efficient soldier”. [1] It doesn’t mention the Robin Hoods, or the RDC, but his next-of-kin was “R. Clayton” of 35 Stanhope St., Sneinton, and that is certainly a known address for Henry & Rebecca Pearson (see aforementioned article). He gave his age as 35 which was a wildly exaggerated lie — he was actually 55 — but he somehow got away with it.

We have some conundrums here: Why did he use an alias? Why did he lie so much about his age? Was there a real William Clayton? Well, he used an alias because of his extensive criminal record. On the army attestation form E.502, there is a question that reads “Have you ever been sentenced to Imprisonment by the Civil Power?”, to which he responded “No”. Interestingly, his medical examination took place at 1 Beck St., Nottingham, and so there couldn’t have been anyone in that building who knew him through his reputation. However, the approving officer, o/c [officer commanding] N. Mid Div Supply Column, signed him in on the same day down in Luton, Bedfordshire.

As far as can be seen in the records, there is just one good candidate for a real William Clayton: His full name was William Frederick Clayton and he was a farm servant born July 1883 (calculated from his attestation age of 18y 2m) in Frampton, Boston, Lincolnshire  — an age in keeping with Henry’s wild bluff.[2] That’s not the only evidence for this being the real William, though. On Henry’s attestation, in response to the question “Have you ever served in the …?”, he said “Yes, 14 years, 4th Lincolns”. Rather than this meaning that he was in the 4th Battalion, Royal Lincolnshire Regiment (a Territorial battalion) for 14 years, this actually meant that his alleged previous service was 14 years ago. Well, this William did serve in that regiment, and in the right time frame: He attested 23 Sep 1901, and was discharged 29 Dec 1902 through the payment of £1 (i.e. “discharge by purchase”). Not only that, Henry was of a slight build — 5’ 4” and 10 stone (1.63m and 63.5kg) — and so was William (5’ 2 1/8” and 104 lbs, or 1.58m and 47.2kg).[3] Having established that the alias may well have been based on a real individual, why would Henry have had to use such an alias as opposed to concocting one? Did he have access to some of William’s identity papers? This William did not die until 1956, and I cannot see any other connection between the two men.

So what about Henry’s son, Frank Belshaw? Frank was born in c1885, well before Henry and Rebecca got married in c1900, and so was registered with his mother’s surname. The following table is a timeline for incidents in Frank’s life compiled from various newspaper reports. All reports were from the Nottingham Evening Post unless otherwise indicated.

The assaults against girls and women make harrowing reading but there are still parallels with his father in terms of a violent character, drinking, and disrespect for the police and the courts.

When Frank joined the army, during WWI, he also had to change his name due to his extensive criminal record. Using his father’s surname, as Frank Pearson, he attested into the ASC for “Short Service (One year with the Colours)” on 17 Aug 1914. Of course, he also responded to the question about having been imprisoned previously with ‘no’. His regimental number was 631 but this was crossed out and changed to 3573, suggesting some sort of transfer.[4] He was sent to Rouen, France, on 26 Aug 1914, and attached to the “28 gang” (possibly some slang reference to the South African Numbers Gangs) Labour Co. On 16 Mar 1915, he was transferred to the “No. 1 Labour Co. (No. 2 Sectn)”, and on 18 Jul 1915 he returned to England, thus confirming the newspaper report of him being in France for one year.

His record contains a number of offences, as you might expect:

The last reference to Frank, before his death in 1958[5], was at a funeral following a house fire that killed his married younger sister, her husband (Frank Whiley), and two of their children. The newspaper reports of that fire[6] gave her name as Rose, aged 49, but there was no Rose/Rosemary Belshaw born in Nottingham in c1888. According to the civil registration index[7], Frank Whiley married Laura Belshaw, and although Laura was in the 1891 and 1901 census, her name was replaced by Rose Belshaw in the 1911 census.[8] Until I came upon these newspaper reports, I could not be sure that Laura and Rose were the same person.

The following is a brief family tree for Frank and Rose Whiley, compiled by comparing the newspaper reports with the civil registration index. Rose’s first two children were born before her marriage so I cannot be certain that Frank Whiley was the father. However, the Nottingham Evening Post report of the fire from 24th December includes testimony at the inquest from Frank Belshaw that indicated he had identified the body of his “father” [Frank Whiley] and had been separated from is “parents” [Frank and Rose] for the past eight years. 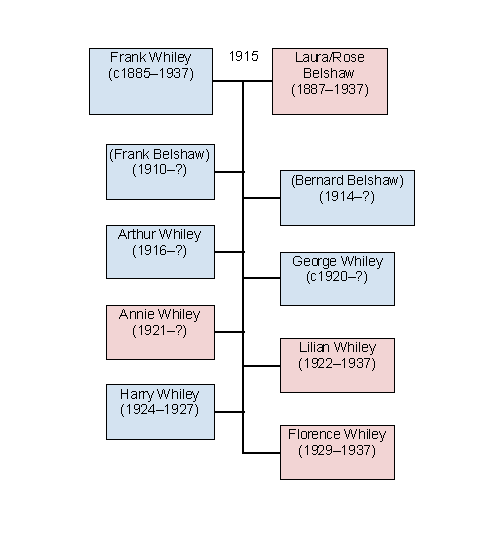 The fire was an awful tragedy that resulted in a mass outpouring of grief in the local community. It began in the early hours of the morning on Christmas Eve, 1937, at 4 Henry Yard, Henry Street, off Sneinton Rd. Neighbours tried to help but the ferocity was such that no one could get near the house. Witness statements mentioned "Flames were bursting through the door and ground floor window. It was impossible to get anywhere near it", and "All sides of the walls were full of flames".

The house was of the back-to-back variety and the only means of approach was via three steps from the yard. Frank and Rose slept in the solitary bedroom on the first floor, together with young Florence (“Florrie”). Lilian (“Lily”) was in the upper bedroom, above them, and George slept on a sofa in the ground-floor kitchen. Annie slept at a separate house due to the lack of room. Such houses were death-traps, with no fire escape. There were no fire-retardant materials used in furniture back then, and much lighting was via paraffin lamps or candles rather than electricity (which was never connected to some of these older houses[9]). Ironically, the family had the chance to move a few weeks earlier as the property was in a clearance area, but the family elected to stay until after Christmas.

The fire appeared to start on the ground floor and quickly engulfed the whole house, thus meaning the occupants were trapped. George (19) and Annie (16) were out at the time, but Frank and Rose, and their two young daughters Florrie (8) and Lily (14) perished. Frank had either leapt or fallen from the first-floor window but landed badly, on his face, in the yard, dying a short time later. Witnesses saw a young girl in the window of the upper bedroom for a few minutes before she disappeared from view.

The funeral, on the 30th December, was sad beyond words. Four hearses carried the bodies in a funeral procession commencing at 91 Elford Rise (where Rose’s sister, Miss Kate Belshaw, lived), and travelling via Windmill Lane, Walker Street, Eldon Street, Henry Street, Haywood Street, and Bond Street, to finish at St. Alban’s Church. Several thousand people lined the streets, and the police were on duty helping the grief-stricken mourners, several of whom were inconsolable. Bernard, one of the elder sons, fainted three times: in the mourning coach, during the funeral service, and again at the graveside. Ten young girls — friends of the family — carried Florrie’s coffin and acted as pall bearers. The Rev. J. W. Busby, one of two clergymen conducting the service, said that he would never forget the day’s experience — their voices being drowned out by the tears and sobs. 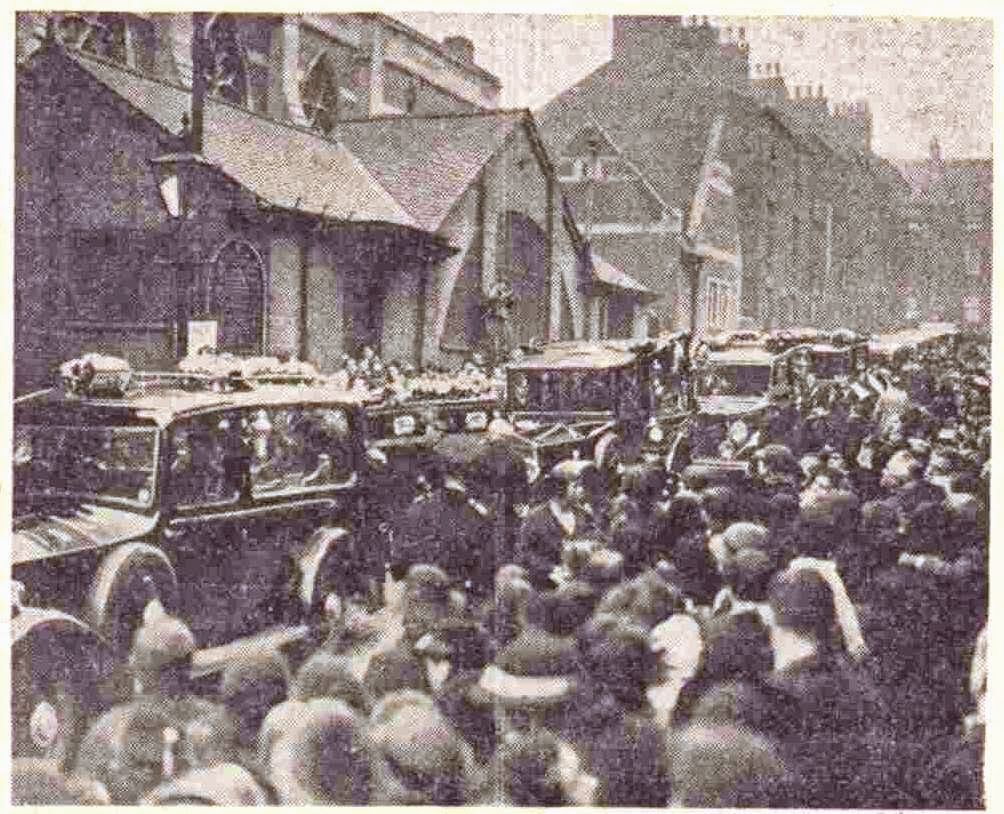 At the coroner’s inquest, it emerged that Lily had lit a paper to find a pair of boots under the sofa in the kitchen at about 10:30pm on the 23rd December. The sofa caught fire but this was put out by George and the father, Frank. It must have remained smouldering, though, as it ignited again at about 12:40am. The chief inspector of fire brigade, described how they had found the bodies of Rose and Florrie in the first-floor bedroom, very severely burned, and the body of Lily between the bed and the window in the upper bedroom, also severely burned.

After reading these accounts, including drunken violence, violence towards women, fraud, a conviction for manslaughter, and a terrible death by fire, you may be asking why I’ve bothered to write about them. Well, the past wasn’t always nice, but we have a responsibility, as researchers, to treat it accurately. My maxim is: you may rewrite your history but you cannot rewrite the past.

[Important Google+ comment preserved] Hi I am writing this as Fay Hembury, we came across this article as we were trying to find information about my nans family who died in this fire - Annie Whiley was my nan, and while we knew her family had died in a fire that is all she really said about it - having read this sad article I can now understand why. She passed away in 1999 from cancer and it is only now all these years later that we know the awful truth about her family. So Thank you as we found it really interesting.