In A Calendar for Your Date — Part I, I mentioned the changeover from the Julian calendar to the Gregorian calendar. People who have read about this may have heard terms such as dual dates, double dates, double years, new/old style, but do you really know what they mean? Was the handling of this changeover a special case — one that needs its own treatment in our data — or was it really an example of a generalised case? It’s time to take the lid off. 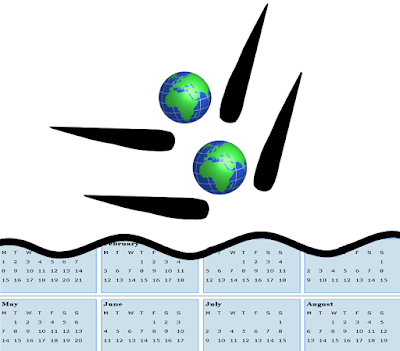 Figure 1 - Synchronised swimming in a sea of dates.

The Gregorian calendar was introduced by papal bull on Thursday 4 Oct 1582, Julian (followed by Friday 15 Oct 1582, Gregorian), but a couple of factors prevented its automatic adoption everywhere. One of these was the fact that it was devised by the Roman Catholic Church, and so in a time of especially fraught church tensions other churches saw it as some type of power-play and resisted. For instance, although other Catholic countries in Europe adopted it either immediately (e.g. Spain), or later that year (e.g. France), or the following year (e.g. Netherlands), Britain, including its colonies — some to later become part of the US — didn’t change until Wednesday 2 Sep 1752, Julian (followed by Thursday 14 Sep 1752, Gregorian; the difference by that time being 11 days rather than 10). Another factor was that many people considered that days were being stolen from them — between 10 and 13 days, depending on the date that their changeover occurred. Birthdays and anniversaries changed, events changed, and that shortened year (282 days for Britain) created difficulties for handling taxes, deadlines, and interest.[1] So why were days taken away?

To understand this, it is important to know the reasons for the calendar change. The length of the Julian year was too long (365.25 days) and that meant that the Easter date was drifting backwards from the traditional date as defined by the early church. There were therefore two main parts to the calendar change: the solar part whereby new leap-year rules corrected the average year to 365.2425 (much closer to the measured average of 365.24219 days), and the lunar part which corrected the cumulative error of 13 centuries of drift by removing 10 days.

To complicate things slightly more, the British year was also deemed to start on the 1st January rather than the 25th March (Lady Day) that it had done since the 12th Century (except in Scotland where they had already changed in 1600). The UK Calendar (New Style) Act 1750, which introduced the calendar changeover, justified the adjustment of the civil year by “Whereas the legal supputation of the year of our Lord in England, according to which the year beginneth on the twenty-fifth day of March, hath been found by experience to be attended with divers inconveniences, not only as it differs from the usage of neighbouring nations, but also from the legal method of computation in Scotland, and from the common usage throughout the whole kingdom, …”.[2] Note that 1st January had long been celebrated as the start of the “historical year” (New Year’s Day) but the Gregorian calendar was essentially a civil calendar, and this was part of the reason why the church could not mandate it. The terms Old Style (O.S.) and New Style (N.S.) are often used to clarify the ambiguities of dates falling between 1st January and 24th March. Old Style meant that something was dated according to the old civil year and so must be adjusted to align with the New Style civil year, or to the historical year.[3]

The fact that the civil and historical years were already different in Britain, even before the calendar changeover (except in Scotland), meant that there was already a means of representing a year combination using a notation informally called double years. For instance, 3rd March 1733/4 clarified that this was March of the civil year 1733 and of the historical year 1734 (i.e. the month before April 1734).  Following the Julian-to-Gregorian calendar change, the difference of 11 days meant that it was not just the year that was different; a date such as 10/22 January 1705/6 explicitly represented both the Julian and Gregorian dates, including their corresponding years.[4] This was another form of a dual date, or double date although this term is no longer preferred due to the ambiguity with the social occasion of the same name.

Even today, the start of the old civil year affects everyday life in Britain since the start of the personal tax year remained at 25th March (O.S.), or 5th April (N.S.), until 1800 when it moved to 6th April. Britain also retains a double-year notation to indicate that a tax year spans two year numbers, e.g. 2011/12.

Although Easter should fall on the Sunday following the full moon that follows the northern spring equinox, both the full moon and the equinox are now determined by calendar rules rather than direct observation. This means that the date calculation (Computus) now differs in different calendars, in different localities, and in different religions. Not all holy festival dates were moved during the changeover, though; the date of Christmas was already 25th December in the Julian calendar. This was subsequently retained by all Western churches, and by some Eastern ones. The equivalent Julian date (in this present time) would be 7th January, and some churches do continue to use that date.

A large part of the confusion must be attributed to the fact that the same calendar era was used — meaning that year numbering was designed to run, as consecutively as possible, from the previous ones — and that the same month names and day counts were retained. Hence, when birthdays or anniversaries had been “bumped up”, it appeared to be a seriously intrusive change, despite the measurement actually being according to a different calendar scale. It is interesting to observe that this demonstrates how indispensable the notion of a calendar had become, and how people attached greater significance to the day number and month name than to the actual time of the year.

If the change had merely included new leap-year rules then no one would have noticed until the next difference (year 1700). Even the change of the year start would have been manageable since countries such as Scotland had already achieved it. However, the correction of 10 days, combined with retention of the old months, appeared as though days were being stolen, and it supposedly caused riots. Finally, the pope’s bull came at a very difficult time as far as relations between the Catholic and Protestant churches were concerned. It was issued in the reign of Elizabeth I and in 1584 a previous attempt was made to adopt it. An act was prepared entitled ‘An act to give Her Majesty authority to alter and make a new calendar, according to the calendar used in other countries’. Although the bill passed two readings in the House of Lords, stalling tactics by Protestant bishops ensured that it was eventually ignored.[5]

When we observe dual dates written during this chaotic transition, or from the period before, when the civil and historical years differed, we can identify two dates expressed according to distinct calendars: the Julian and Gregorian, or Julian with civil and historical years, respectively. In other words, it was not always the case that dual dates represented Julian and Gregorian dates during the changeover — a common misconception. What the cases have in common is that the date pairs represented the same day.

In A Calendar for Your Date — Part II, I made a case for holding an additional normalised (computer-readable) version of our dates, but how should this be extended to such pairs? The situation is not a special case as there are other precedents for representing the same day according to different calendars. In Israel, for instance, government documents usually carry a dual date embracing both the traditional Hebrew calendar and the Gregorian calendar. Similarly, following the calendar reforms of India, in 1957, government documents carry a dual date embracing the new national calendar of India and the Gregorian calendar.

STEMMA therefore defines the notion of synchronised dates, where a single entity describes an item from a written or printed source that embraces representations of the same day according to two or more calendars. To see this in action, let’s look at the combined Julian-Gregorian date example from above: 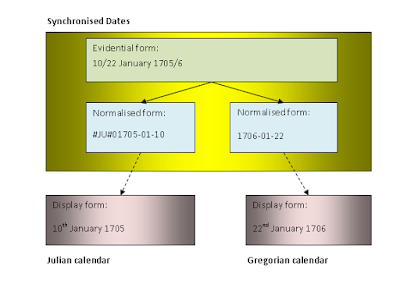 We can immediately see that the one evidential form — that obtained from the consulted source — yields two normalised forms: one according to the Julian calendar and one to the Gregorian calendar. Any number of display forms can be generated from these normalised forms, dependent upon the regional settings and personal preferences of the end-user.

Anyone who hasn’t read my previous two articles on dates might be wondering why we need to store two normalised values when one will do, employing a conversion algorithm when necessary. However, note that not all such dual dates have an obvious interpretation. For instance, double years were occasionally used for months other than January to March which makes little sense, and so needs some considerable interpretation. These two normalised forms provide a direct interpretation of the relevant parts of the evidential form.

When other calendars are considered then the conversion to the Gregorian calendar — necessary for date comparison and timelines — is not always reliable. In these circumstances, the same entity can describe the direct interpretation of the evidential form and the calculated version of it. I’ll return to the French Republican calendar example from the aforementioned article in order to demonstrate such a conversion: 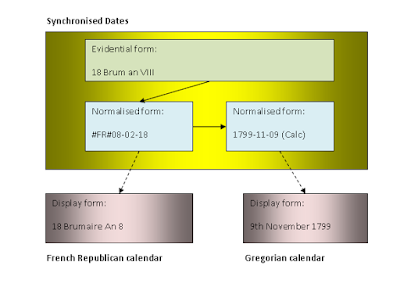 In effect, the same synchronised-date entity is used to represent both dual dates and cases where a value in an alternative calendar has been calculated. In both circumstances it binds the multiple derived forms (normalised and/or calculated) to a single evidential form.