The answer to this should be obvious to all of us, and yet it’s always hard to find any agreement. The subject has been discussed ad nauseam but I want to try and present a new slant; a parallax view. The case I want to make is that our collective uncertainty and our lack of agreement are holding us back, and in more ways than one too. 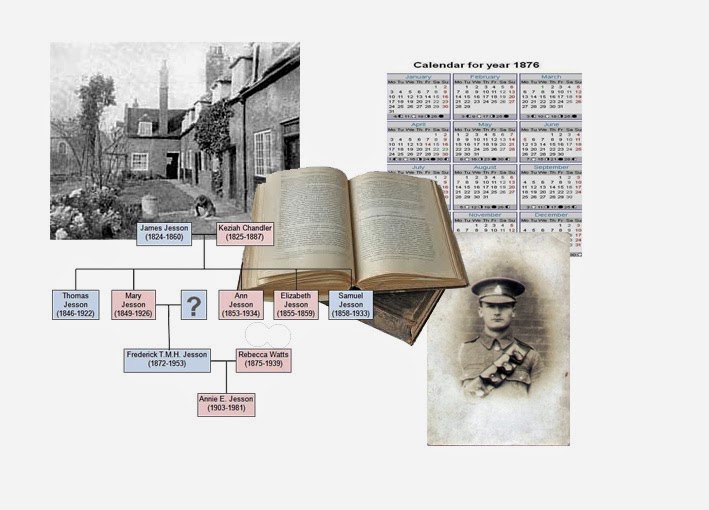 The fundamental issue with this question is whether you accept the literal definition of genealogy, or the more general context in which modern genealogy is practised. You see, the word genealogy is derived from the Greek γενεά (genea) meaning "generation" or “descent”, and λόγος (logos) meaning "knowledge". In other words, it literally means the study of biological lineage, but is that what we do?

Some people prefer to use the term family history as it is more specific. However, it has been suggested before that this term may be less common in the US than in other countries, and especially in the UK. This is borne out, to some extent, by our respective dictionaries. The Oxford English Dictionary defines genealogy as:

“A line of descent traced continuously from an ancestor”, and “The study and tracing of lines of descent”.[1]

This is consistent with the original derivation of the word, but the Merriam-Webster Dictionary defines it as:

“The study of family history”, and “The history of a particular family showing how the different members of the family are related to each other”.[2]

Clearly there’s a difference, and it appears to reinforce the suggestion that US genealogists believe they are already family historians.

In the UK, the Society of Genealogists (SoG) posts their distinction of the terms at: http://www.sog.org.uk/education/gandfh.shtml. I personally prefer the following more precise and succinct distinction that appeared in a UK genealogy magazine:

"We use genealogy and family history as though they are one and the same thing, but of course they are not. Genealogy is a purer search for historical connectivity between generations — building a family tree or pedigree, if you like — whereas family history is a broader piece of research into their lives and activities"[3]

So is this distinction necessary? Last year, there was a movement to merge the previously separate Wikipedia pages for Genealogy and for Family History. The new page is found under http://en.wikipedia.org/wiki/Family_history but is entitled “Genealogy”, and this reflects one of the practical justifications for that change: people do not want to search the Internet using both terms. Many arguments were put forward for either keeping these pages separate or for merging them, and a summary can be found at: What is the Difference between Genealogy and Family History?.

Although I argued at the time that the terms were not synonymous, I can see the rationale for treating them as synonyms. Certainly the term genealogy is often employed in the context of family history. However, take a look at the Wikipedia page for: Family tree. This discusses the concepts of lineage representation through family trees and pedigree charts, but goes on to describe these in a heading as ‘Family history representations’. This illustrates one of the major failings of that merger, and probably justifies by itself the deliberate use of the term family history.

The term family tree is ubiquitous but it has also come to reflect the poorer side of our historical pursuit. Family historians want to study history, and want to write narrative articles. Their intended separation is primarily from people who compile family trees — especially online ones — but the term genealogy is implicated because it has an unfortunate split personality. I won’t argue that a family tree has no historical content but that content is thin, and devoid of the temporal, geographical, social, and occupational context for its people. Academic historians are known to separate their studies from genealogy but the same skewed association may be underpinning that too.

Anyone who disputes the association between genealogy and family trees should look at advertising on the Internet. It is depressingly littered with such references as “Research your family tree”. This very day, I received an email from Ancestry proclaiming “It’s Spring!  Build your family tree”. In my small experience of getting people started in genealogy, I found that they invariably used the term family tree when they really meant something bigger: family history, but they didn’t know how to describe it.

A common thread through most of my blog posts has been my declared interest in Micro-history, and its representation through STEMMA®. Micro-history is about the finer grains of history, whether they involve specific non-famous people, a family, a surname, a village, non-global events, or a military regiment. Being a superset of family history, it elevates the study of the requirements for historical data out of any potential lineage trap. The UK’s Dr Nick Barratt has previously criticised the “rather sad division … [that] exists between the worlds of family history and local history”, and went on to point out that the earliest known origins of genealogy — the antiquarian historians of the Elizabethan era — researched history rather than merely lineage.[4] He has also advocated closing the gap between academic and public historians (which includes family historians), although this was not greeted well by the academic historians.[5]

It has been suggested to me before that there is no market for a software product with this degree of scope. Although I cannot estimate its potential size and commercial value, I can reliably say that there is such a market. The feedback I’ve had from experienced genealogists — which, for the purposes of this article, includes anyone who has researched the history of someone or something — has bemoaned the scope of existing software products. This sentiment was echoed during a discussion involving representatives of the Association of Personal Historians (APH) during 2012. By coincidence, during the writing of this article, I received a notification from StackExchange that someone was looking for a collaborative site that provided support for narrative stories as well as lineage.

Whether we admit to it or not, the design and scope of our current software products has been compromised by the association of genealogy with biological lineage. With some humour, I can almost imagine a conversation with a programmer designing one of the earliest genealogical products: “A tree? Oh yeah, easy, we use trees all the time in programming”, and then later, when some data wants to depict a spouse who is also someone’s second cousin: “Oh, this isn’t a tree is it? It’s a directed acyclic graph, so why didn’t you say that before?”. The tree paradigm is still used by all the products I know of, either internally or in their user interface (UI). If we add a picture, or a source reference, then this usually means people end up adding them directly to a specific person in their tree, which is demonstrably wrong. In Evidence and Where to Stick It, I posed the question of a family group photograph originally appearing in a newspaper. Do you attach the same image to every relevant person in your tree? If so, then where do you place the details of where and when it was taken, plus the newspaper citation, plus the newspaper caption and article that went with it?

Events are another example of this legacy since shared (aka ‘multi-person’) events are an essential element for representing any type of history. However, the lineage-linked GEDCOM data representation does not cater for them. Although most products that have an event concept will have since made them applicable to multiple people, the GEDCOM representation still prevents them being exchanged correctly with other products. Even those products that would claim to have shared events would probably expect you to add a photograph directly to one or more people rather than to an event representing the where and when of the photograph. In other words, addressing a timeline — again, an essential element for historical data — probably wasn’t part their original design paradigm, and may have been tacked-on in order to sequence the so-called vital events such as birth, marriage, and death. A similar case could be made for geographical context, including both large-scale (e.g. counties, states) and small-scale (e.g. streets, houses).

The woes of shoehorning the structure of historical data into some tree-like representation are nowhere more evident than in online Web sites. One reason has to be the seductive simplicity of a tree implementation compared to ... well, some real historical representation. When dealing with collaboration then even those simple trees introduce a mass of technical difficulties. This is not so much a fundamental issue with collaboration as the wrong model being implemented.  I mentioned earlier someone’s quest for a collaborative site that supported narrative as well as lineage. Although the responses included suggestions of a wiki and a blog, these are very one-dimensional approaches — again, how do you associate a given story with multiple people represented in a tree? Several commentators have suggested that the simple facts in a tree cannot be “owned” by anyone, and so a free-for-all collaboration should work. Interestingly, when narrative representations of history are involved then authorial ownership becomes very important. If you were to upload a recollection of your youth, or a story told directly to you by your great grandfather, then by what right would anyone else expect to edit or change it? In fact, collaboration on this level is possible, including those issues of ownership and association of narrative with multiple person entities, but it means using a different model. One such scheme was presented in a previous blog-post at: What to Share, and How - Part II.

In summary, the points I’m making here are as follows: